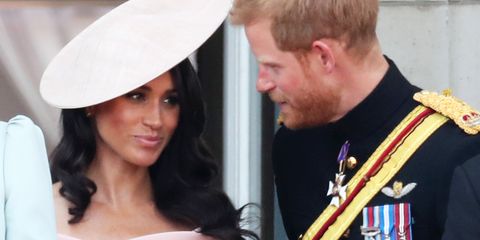 Meghan Markle made her Buckingham Palace balcony debut yesterday at the 2018 Trooping the Colour. The annual event in celebration of the Queen's birthday marks Meghan's first public appearance with the entire royal family since her wedding on May 19.

She was poised and looked perfectly at home waving to the crowds from the balcony alongside Prince Harry and her new in-laws.

But, according to MirrorOnline (via The Sun), Meghan may not have been as chill and relaxed as she appeared. The publication enlisted the help of an expert lipreader to reveal what Meghan and Harry were talking about on the balcony. Of course, this is based on a lipreading, so take it with a grain of salt.

According to the MirrorOnline's lipreader, Prince Harry turned to his Meghan and asked, "Okay?" Meghan's reply was reportedly, "Yeah, are you?"

Yeah, that seems like the exchange a couple would have during their first time participating in a big family tradition together. Fair enough.

After that first, very simple exchange, Meghan and Harry reportedly locked eyes and she said she was "nervous" (along with a "coy smile," according to The Sun).

Here's where things get a little more interesting (if we can trust the lipreader's interpretation, of course): After that, Harry allegedly said, "Yes...," then paused for a smile before adding, "When you get into it, I'll tell you more later."

More about what Harry? His own experiences being nervous during royal engagements? His tricks for dealing with the nerves? Since the MirrorOnline's lipreader does not have x-ray vision, however, we may never know what Harry said when they got back inside. Alas.