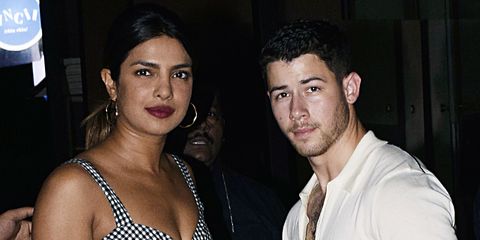 Next stop, Brazil. Priyanka Chopra and Nick Jonas have added a South American leg to their world love tour. After a week in India together, the couple were spotted touching down at the Guarulhos International Airport in Sao Paulo, Brazil on Friday.

Nick is scheduled to perform at the VillaMix Festival this weekend and, clearly, Priyanka decided to tag along for emotional support (and a romantic trip to Brazil).

"Pumped to get back on stage! See you guys at @Villamix this weekend 😎 #villamixgoiânia," Nick wrote in an Instagram post about the performance.

Priyanka and Nick have been traveling together a lot recently. The couple just spent a week together in India, where Nick reportedly met her mother, Madhu (who reportedly told India's DNA that it was "too early to form an opinion" on the singer). Both stars posted pictures of each other on their Instagram Stories during the trip, taking the relationship Instagram official.

While in India, the couple also attended the engagement party of Akash Ambani, the son of an Indian billionaire, according to TMZ. Priyanka wore a gorgeous red sari and Nick wore a nice blue suit.

Before that, they traveled to New Jersey to attend Nick's cousin's wedding and have basically been inseparable since Memorial Day weekend, when they were spotted hanging out all around Los Angeles.

Kayleigh Roberts Contributor Kayleigh Roberts is the weekend editor at Marie Claire, covering celebrity and entertainment news, from actual royals like Kate Middleton and Meghan Markle to Hollywood royalty, like Katie Holmes and Chrissy Teigen.
This content is created and maintained by a third party, and imported onto this page to help users provide their email addresses. You may be able to find more information about this and similar content at piano.io
Advertisement - Continue Reading Below
More From Celebrity
Why Isn't Archie Mountbatten-Windsor a Prince?
A Body Language Expert on the Oprah Interview
Advertisement - Continue Reading Below
See an Adorable New Sussex Maternity Shoot Photo
Why Is the Royal Family Called "The Firm?"
Read Serena Williams' Statement on Oprah Interview
The Internet Reacts to Meghan and Harry Interview
Prince Harry: The Queen Was Advised Not to See Me
The Palace Had Concerns About Archie's Skin
Harry Says Racism Was "A Large Part" Of Leaving
Stacey Abrams on Her Election Wins & What's Next