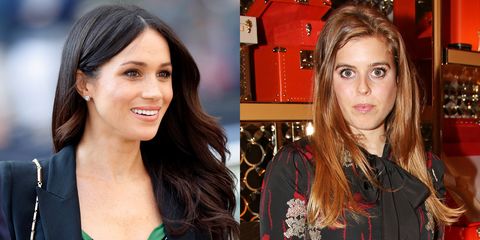 Ever since her engagement to Prince Harry, Meghan Markle has been a royal fashion icon. Her influence even has a name: The Meghan Markle Effect. Any time Meghan wears an item of clothing, it sells out almost immediately. Everyone, it seems, wants to dress like the Duchess of Sussex—including her new in-laws, apparently.

Princess Beatrice, Harry's cousin, has been making some style changes of her own lately. Beatrice has long been known for her bold, quirky sense of style. Think big patterns and eccentric hats.

Beatrice's most notable style moment came in 2011, when she and her sister, Princess Eugenie, famously made headlines for the scene-stealing (read: insane) hats they wore to Prince William and Kate Middleton's wedding. A reminder:

Since Meghan Markle came on the scene, however, Beatrice's style has gone through a noticeable shift.

"Beatrice has definitely been taking notes on the royal fashion of Meghan. She has been a big influence on fashion, trends and style and I think she has seen the power in that," White said. "This has probably made her look at her own fashion and style choices."

"These are the looks that Meghan had before she became a royal. I think she has been inspired by past and current looks of Meghan," White continued. "Looking at her, she has grown into a more sophisticated trendy style. The styles she is choosing now are much more fashionable and on trend. I think they look much more flattering for her."

"Now, I feel she has been inspired by Kate and Meghan, which has helped her review her own style and help define what works for you and what she likes," White said. "I think she is coming into her own with her fashion and style choices and is great to see. This could open up the door for her."

Kayleigh Roberts Contributor Kayleigh Roberts is the weekend editor at Marie Claire, covering celebrity and entertainment news, from actual royals like Kate Middleton and Meghan Markle to Hollywood royalty, like Katie Holmes and Chrissy Teigen.
Advertisement - Continue Reading Below
More From The Ultimate Guide to the Royal Family
Harry & Meghan Respond to Queen's COVID-19 Speech
The Queen's Green Dress Made Her a Hilarious Meme
Advertisement - Continue Reading Below
The Cambridge Kids Are Imitating the Queen in 1940
Queen Elizabeth's Dress Nodded to NHS Workers
The Queen's Subtle Message for Harry & Meghan
People Cried Through the Queen's Speech
Watch the Queen's Address About COVID-19
Duchess Kate's Style Is Getting Simpler
Meghan and Harry Won't Be Working for a While
Meghan's Royal Stylist Spills on Her Look Inspo