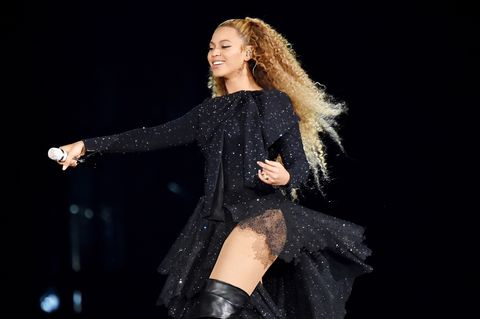 When it comes to fashion, no one outdoes Beyoncé's style. Bey took to her Instagram on Saturday to share new pictures and, just like every time she graces us with a series of Instagram posts, the pictures were a blessing to our feeds.

The first post in the series is a video collage, featuring several pictures of Bey killing it in her Zimmerman pink paisley ensemble. She poses in several locations in the photos, including a private jet, backstage at one of her shows, and against a nondescript, black-and-white wall, as Entertainment Tonight notes. The pictures in the video include some rare snaps of Beyoncé embracing her sillier side, even sticking her tongue out for the camera.

Beyoncé's entire look is perfection in the photos—not that that's anything new for the singer and mother of three. Her ruffled, pink paisley shirt and matching, high-waisted shorts are paired with clear heels and a boxy, white purse. Bey topped off the look (quite literally) with an epic blonde top knot and accessorized with big, pink sunglasses, hoop earrings, and statement red lips.

As usual, Bey decided to forgo adding a caption and let the pictures speak for themselves (which they do, loud and clear, screaming, "QUEEN").

Bey followed the video collage up with two more snaps from the same photo shoot, both of which highlight her incredible legs and boss attitude.

Beyoncé and her husband, rapper Jay-Z, are currently on their On the Run II world tour. They landed in Warsaw, Poland on Saturday night and are fresh off the release of their surprise joint album, Everything Is Love.

Kayleigh Roberts Contributor Kayleigh Roberts is the weekend editor at Marie Claire, covering celebrity and entertainment news, from actual royals like Kate Middleton and Meghan Markle to Hollywood royalty, like Katie Holmes and Chrissy Teigen.
Advertisement - Continue Reading Below
More From Celebrity
Celebrities Who Are Mistaken for Other Celebs
Dolly Parton, Icon, Started a Viral Meme
Advertisement - Continue Reading Below
Meghan & Harry's Trademark's Been Blocked for Now
Khloe Kardashian's House Has a Room for Extensions
Katie Holmes Stuns in a White Oversize Coat
Taylor Swift Opens Up About Past Eating Disorder
Courteney Cox's 'Friends' Photo Has a Sweet Secret
Celebrities With Kids You Didn't Know About
People Think Prince Charles Ignored Mike Pence
Brad Responded to Those Photos With Jen