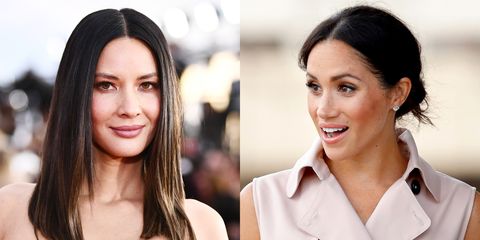 When you take a trip to London, there are a few things you can’t miss to score full Brit points. See Big Ben, eat fish and chips, pretend to be in Harry Potter at Platform 9 3/4—and now, thanks to Duchess of Sussex Meghan Markle, there’s one more, very important thing on the tourist To Do list. You have to recreate her teenage Buckingham Palace photograph. Just ask Olivia Munn, who made sure to channel her inner Duchess on her recent trip to the English capital.

The actress arrived in London for a group getaway earlier this week, which included a trip to Wimbledon just across the court from Meghan herself. Amongst the selection of Instagram photos with her friends, Munn took the opportunity to capture her very own version of Markle’s now-iconic 1996 picture.

Shared on Instagram by pal Matthew Hoffman, Olivia totally nailed their version of the famous photo of teenage Meghan (which you can see here), sitting on the railings with childhood friend Nina Priddy, in front of her future husband’s royal digs. Little did Markle know that, 22 years later, she’d be part of the actual real life British royal family, heading inside for afternoon tea on the reg.

The original snap of Meghan sitting pretty outside Buckingham Palace first emerged online via the Daily Mail, shortly after her engagement to Harry was announced back in November 2017. It was revealed that the amazingly ironic, verging-on-magical picture was captured during the former actress’s summer tour of Europe back in the mid 90s when she was just 18-years-old.

So that's it. Recreating that photo is now the only single thing I care about doing next time I’m in London.

Related Story
What It's Like To Hang Out With Meghan Markle
Lucy Wood Contributor, MarieClaire.com Lucy Wood spends most of her time writing about celebby things, reading books, and waiting for the glorious day that she have enough millions for a pet sloth.
This content is created and maintained by a third party, and imported onto this page to help users provide their email addresses. You may be able to find more information about this and similar content at piano.io
Advertisement - Continue Reading Below
More From Celebrity
Alicia Silverstone Got Banned From a Dating App
The Queen Just "Reluctantly" Canceled a Trip
Advertisement - Continue Reading Below
Adele's Album Will Feature a Sensitive Voicemail
Selena Gomez Just Debuted a Sleek Bob
Zendaya Looked Incredible at the 'Dune' Premiere
Kate Middleton Is Helping Tackle Addiction
The Queen Was Advised to Stop Drinking for Now
Scott Disick Is "Not Happy" for Kourt and Travis
Emma Watson Stunned at the Earthshot Prize
Kate "Didn't Have Much Energy to Bond" With Meghan