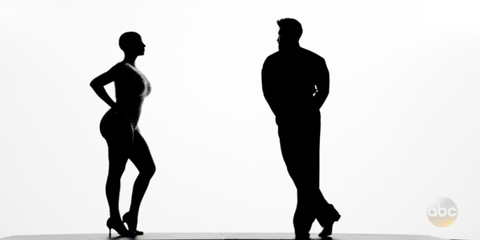 Amber Rose officially just proved that she's going to be a force to be reckoned with on this season of Dancing with the Stars.

During the season premiere on Monday, Amber finally got to meet her partner Maksim Chmerkovskiy, and the two immediately hit it off. From the start, Amber said he was a great match for her, and everyone could instantly feel their potential dance floor chemistry.

After learning that they would be doing the foxtrot, the two then got down to work. At first, Amber expressed concerns over the fact that she wasn't enough of a "princess" for the dance, but Maksim quickly reassured her that he had her back and helped her relax with his goofy sense of humor.

The two started their routine with a sexy little introduction that had the whole audience fanning themselves.

And once they actually go to the foxtrot, things only got better. Contrary to Amber's fears that she wasn't enough of a "princess" for the routine, she looked like total royalty on the floor.

To make the whole thing even cuter, her BFF Blac Chyna was there to help cheer her on.

To find out if Amber and Maksim make it to the next round, tune in to Dancing with the Stars tomorrow night on ABC.