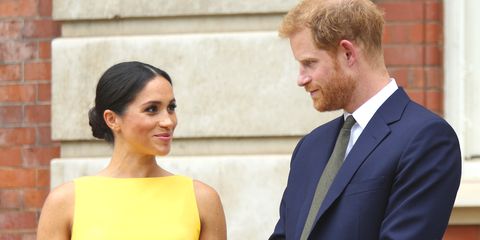 Although Prince Harry and Meghan Markle tied the knot less than three months ago, the world is anxiously awaiting for the Duke and Duchess of Sussex to start a family. Welp, Meghan's pregnancy announcement may be on the horizon, folks, as the latest hint that the royal couple are preparing for children has surfaced. According to BBC, the prince has put his sports car up for sale—a move that hopefully means the Duke and Duchess are in the market for a family-friendly car.

The car in question is Harry's Audi RS6 Avant—which the prince reportedly has used within the last year (he even drove it to Pippa Middleton's wedding reception). And for any interested parties, Auto Trader has listed the car for a cool £71,900. "17 reg and low mileage, so it begs the questions why is the prince selling so soon?" Auto Trader's editorial director Erin Baker says. "Maybe he's on the market for a bigger family car."

This isn't the first time it's been speculated that Harry and Meghan are ready for children. A mere few weeks after their wedding, a source close to the royals said the Duke and Duchess are looking to start a family ASAP. “She’ll start trying as soon as she can...But they won’t rush into anything," the source says. "They both think that when the moment feels right, that will be the time to go for it."

Related Story
Harry and Meghan's Children Will Use This Surname
Ruby Buddemeyer Beauty Editor Ruby is the beauty editor at Cosmopolitan, where she covers beauty across print and digital.
This content is created and maintained by a third party, and imported onto this page to help users provide their email addresses. You may be able to find more information about this and similar content at piano.io
Advertisement - Continue Reading Below
More From The Ultimate Guide to the Royal Family
How Kristen Stewart Is Prepping to Play Diana
How to Make the Queen's Favorite Cocktail
Advertisement - Continue Reading Below
The Queen Told Harry to Uphold His Family Values
Twitter Is Thirsting over Prince Harry
Your Guide to the Current Royal Line of Succession
A Look Back at Princess Anne's Life in Photos
A Look at Royal Family Portraits Through the Years
Diana's Unearthed Letters to a Friend for Auction
The Queen Hoped Harry & Meghan Would Cancel Exit
Will Is Sad and Shocked by Harry's Reply to Queen