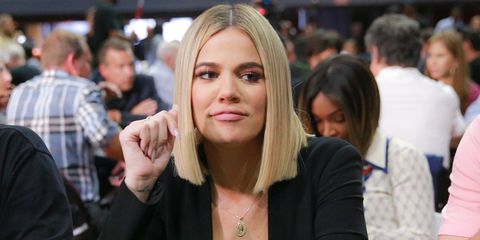 Because we live in an age of internet trolls and people who think female bodies are up for general discussion, Khloé Kardashian felt it necessary to go ahead and explain some changes to her body fans will notice in the new season of Keeping Up With the Kardashians, which premieres tonight on E!. Yes, her lips look bigger. No, she didn't get fillers—not that it's really any of our business, anyway.

Khloé took to her Instagram Story earlier today to set the record straight, issuing a preemptive strike to anyone with ~opinions~ about her face during the new season of KUWTK. The simple explanation: Her lips look bigger because she was pregnant while filming the season.

"PSA I was pregnant during the entire season of KUWTK. Some women get 'pregnancy lips.' I was one of them. So my lips look crazy and massive. Trust me I know and I HATED IT!" she wrote. "A lot of wild shit happens to your body and face while pregnant. It's out of our control. Most people don't have to film during an entire pregnancy so just watch the show and be kind about my growing body and lips. Pregnant women should be off limits."

While it's disappointing that Khloé had to address the issue at all, at least this will hopefully quiet any potential rumors about the star, who has honestly already been through a lot in the last year.

As usual, momager extraordinaire Kris Jenner has been promoting the hell out of the new season of the family's flagship series.