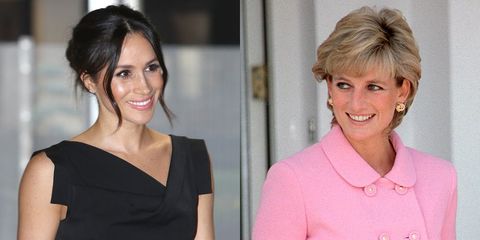 Like mother-in-law, like daughter-in-law. It's well-documented that Meghan Markle has a lot in common with her husband, Prince Harry's, late mother, Princess Diana. She's channeled her style. She and Harry honored Diana at their wedding. In fact, Meghan was actually obsessed with Diana long before she ever met Harry.

Now, it turns out Meghan and Diana share a very specific (and very sweet) hobby: A love for sending and receiving handwritten letters. In the digital age, handwritten letters are a dying art form, but Meghan professed her love for them in a post on her now-defunct lifestyle blog, The Tig.

"What trumps all is my love of writing (and receiving) a handwritten note. I absolutely relish it," she wrote, according to Express. "I know my mailman’s name, I race to the door when the mail comes (usually just fliers or bills) but I always hold out hope there will be a letter. A sweet letter. And then I will have the tactile experience of un-creasing the paper, reciting the words and holding someone’s thoughts in my hands."

Diana was also reportedly a bit of a handwritten note enthusiast. According to Express, the late royal was known to send out hundreds (possibly thousands) of handwritten notes herself for special occasions.

After her 1981 wedding to Prince Charles, Diana "sat down to answer many of the 47,000 letters of congratulation and 10,000 gifts which the wedding generated," royal author Andrew Morton told The Mirror.

This is just more proof that Diana and Meghan would be the best of friends.