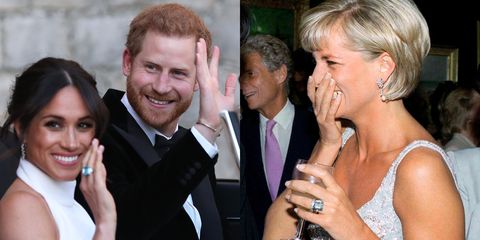 You didn't think there would be a royal wedding without honoring Princess Diana, did you? Today, Meghan and Harry made a beautiful tribute to Harry's late mother. Here's how they honored the former princess on the big day.

No, not the wedding ring. Meghan honored her late mother-in-law by wearing her personal ring to the evening reception at Frogmore House, hosted by Prince Charles. It was spotted on Meghan's figure while she waved from the Jaguar she and Harry drove to the reception.

According to Kensington Palace, "The spring blooms include Forget-Me-Nots which were Diana, Princess of Wales’ favorite flower. The couple specifically chose them to be included in Ms. Markle’s bouquet to honor the memory of the late Princess on this special day."

Harry and Meghan had Lady Jane Fellowes, one of Princess Diana's older sisters, represent Princess Diana's family. She gave an official reading where she read a passage from the Old Testament, Song of Solomon 2:12:

All three of Diana's siblings (including Sarah McCorquodale and Earl Spencer) were in attendance at the wedding. Lady Jane's daughter, Laura Fellowes, is a godmother to Princess Charlotte. Since Princess Diana's death, her siblings have not been heavily in the public eye.

Meghan wore a boatneck style Givenchy dress designed by Clare Waight Keller. Princess Diana chose a similar style for her wedding day back in 1981, opting for a high neckline and minimal lace.