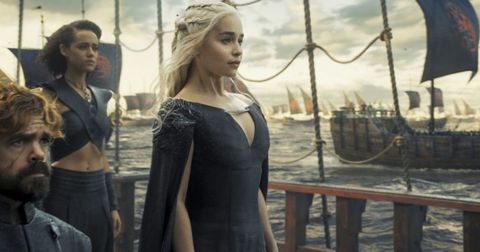 Game of Thrones fans who are already dreading the end of the series can breathe a sigh of relief: HBO seems quite committed to bringing us more from the fantasy world.

HBO Programming President Casey Bloys told The Hollywood Reporter that the network is definitely interested in continuing the GoT saga. "There are so many properties and areas to go to," Bloys said at the Westworld premiere. "For us, it's about finding the right take with the right writer."

Of course, the right writers probably won't include Game of Thrones showrunners David Benioff and D.B. Weiss, who have said they aren't interested in working on any potential spinoff series.

"I'm sure there will be other series set in Westeros, but for us this is it," Benioff said after the Emmy Awards.

As insistent as Benioff and Weiss have been that they're done with Westeros after Thrones, Bloys seems to think it's still possible that they'll be involved in a spinoff.

"You're getting them right when they're about to embark on production," he explained. "It's a big, big commitment for them, not just their creative force, but also their family life. They're gone for months at a time. So it's a big, big thing. But should we find a property that makes sense as a spinoff or a prequel—whatever you want to say—I would not expect them to do it, because they're going to need to decompress for a good amount of time, but it would certainly be nice to have their involvement in some way."

As for what the spinoff would center on, Bloys seems open to just about anything.

"There are things that sound interesting, but at this point, we have no writers assigned or anything like that," Bloys said. "In a perfect world, Game of Thrones would keep going, and we wouldn't have to deal with any of this!"

That mention of a prequel, though. Could we see the story of the Mad King? More of Young Ned Stark's life? Because really, we fans are open to anything too.

Kayleigh Roberts Kayleigh Roberts is the weekend editor at Marie Claire, covering celebrity and entertainment news, from actual royals like Kate Middleton and Meghan Markle to Hollywood royalty, like Katie Holmes and Chrissy Teigen.
This content is created and maintained by a third party, and imported onto this page to help users provide their email addresses. You may be able to find more information about this and similar content at piano.io
Advertisement - Continue Reading Below
More From Celebrity
40 Strict Rules the Royal Children Have to Follow
Megan Thee Stallion Stuns With Neon Pink Hair
Advertisement - Continue Reading Below
Phoebe and Pete Wore Matching Initial Necklaces
The Queen to Sit Alone at Prince Philip's Funeral
Royals Announce Who Will Attend Philip's Funeral
Prince Philip Will Not Have a State Funeral
Harry Doesn't Want Drama at Philip's Funeral
How Meghan Feels About Missing Philip's Funeral
Eva Longoria Loves Her Mini Trampoline
The Royals Won't Wear Uniform at Philip's Funeral