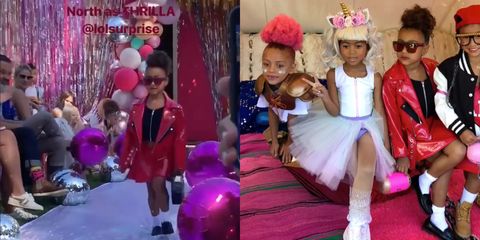 North West is officially going into the family business. Well, one of the family businesses anyway. Nori is taking after her aunt, Kendall Jenner, and trying out the runway fashion model life. Reminder: North is five years old and the rest of us are doing nothing with our lives by comparison. 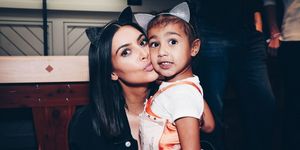 North made her official runway debut in the L.O.L. Surprise Fashion Show in Palisades Park, California on Saturday. The show was in support of L.O.L. Surprise's popular toy line, and the event was everything that a children's toy-inspired fashion show should be. The runway was glittery. The outfits were inspired by the L.O.L. Surprise characters. There was a photo booth on site and the show was catered with sweets. It was heaven for a kid (or for anyone, honestly).

Kim Kardashian posted videos from the runway on her Instagram Story, like any proud mom would. North wasn't the only celeb kid who walked the show though; Busy Philipps' daughter Birdie, and Sara Foster's daughter Valentina, also took part, with each kid dressing as their favorite L.O.L. Surprise character. North opted for Thrilla's look, channeling Michael Jackson like a true pro.

Seriously though, the LEWKS:

Busy Philipps also posted a picture of her daughter at the show: