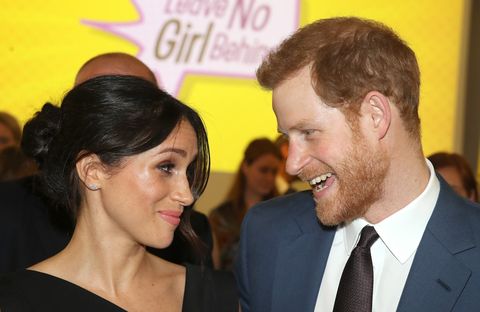 At the end of the month, Prince Harry and Meghan Markle will travel to Australia and New Zealand for their first royal tour since their wedding in May. The tour will begin in Sydney on October 16 and the couple will also visit New Zealand, Fiji, and Tonga during the trip.

The trip also coincides with the 2018 Invictus Games, which are being held in Sydney. The Games were started by Harry and invite wounded and sick veterans to compete in a variety of sporting events. The Invictus Games kick off on October 20 and, on the 19th, Harry will do something pretty daring to honor the start of the 2018 event.

According to People, Harry will climb the Sydney Harbour Bridge on the 19th to raise the Invictus Flag himself. Australian Prime Minister Scott Morrison will join Harry for the climb, but not Meghan—People reports that she will stay on the ground, tyvm.

While the climb may seem dangerous, it's nothing new to Harry, who has a reputation as a daredevil. He's actually climbed the Sydney Harbor Bridge once already, back in 2005, and he's tried his hand at other daring feats like skydiving. So this will be NBD to the royal.

The Invictus Games will certainly be a highlight of the royal tour, but they won't be the whole focus. In a statement released Thursday, the palace said that the Australian tour "will focus on youth leadership, and projects being undertaken by young people to address the social, economic, and environmental challenges of the region" and that Harry "is particularly keen to highlight these youth-led initiatives in his new role as Commonwealth Youth Ambassador, and to shine a light on the work and aspirations of young people across the Commonwealth."

This content is imported from {embed-name}. You may be able to find the same content in another format, or you may be able to find more information, at their web site.
[H/T: People]
Kayleigh Roberts Contributor Kayleigh Roberts is the weekend editor at Marie Claire, covering celebrity and entertainment news, from actual royals like Kate Middleton and Meghan Markle to Hollywood royalty, like Katie Holmes and Chrissy Teigen.
This content is created and maintained by a third party, and imported onto this page to help users provide their email addresses. You may be able to find more information about this and similar content at piano.io
Advertisement - Continue Reading Below
More From The Ultimate Guide to the Royal Family
The Queen's Corgis Are Helping Her With Her Grief
Charles is Looking Forward to Seeing Harry Again
Advertisement - Continue Reading Below
Will & Harry to Walk Together at Philip's Funeral
Prince Charles Addresses Prince Philip's Death
Prince William Pulls Out of 2021 BAFTA Appearances
Prince Philip Said He Had No Desire to Live to 100
The Queen Was by Prince Philip's Side When He Died
Prince Harry Is "Really Upset" Over Philip's Death
Will Harry & Meg Attend Prince Philip's Funeral?
The Queen Is Hopeful Prince Harry Will Return Home