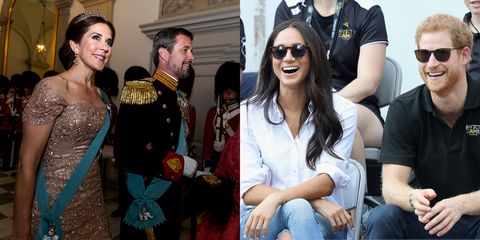 The 2018 Invictus Games are shaping up to be a real royal hotspot. Danish royals Princess Mary and Prince Frederik are set to attend the event, according to the Daily Mail.

Princess Mary and Prince Frederik will join other celebrity guests at the games, including David and Victoria Beckham and their children, Brooklyn, Romeo, Cruz, and Harper, and, of course, Prince Harry and Meghan Markle. David Beckham is very involved in the Games, and serves as an ambassador for them.

"I’ve been lucky enough to meet and work with many serving, veteran and wounded British armed forces personnel over the years and I’ve been humbled by the courage, resilience and spirit shown by each and every one of them," Beckham wrote in an Instagram post announcing his role as ambassador. "So, I’m incredibly proud to announce I will be an Ambassador for this year’s Invictus Games in Sydney. The entire Invictus Games team, led by the Duke of Sussex, has achieved remarkable things in such a short space of time, using sport as a powerful force to rehabilitate and unite and I can’t wait to be part of the energy and the excellence of the Games this year."

Prince Harry created the Invictus Games in 2014 as the only international sporting event for wounded and disabled veterans. The Invictus Games are held in different cities around the world (Harry and Meghan famously stepped out together as a couple when the Games were in Toronto in 2017, where he also met her mom, Doria Ragland, for the first time).

This year's Invictus Games will take place in Sydney and will coincide with Harry and Meghan's tour of Australia and New Zealand.