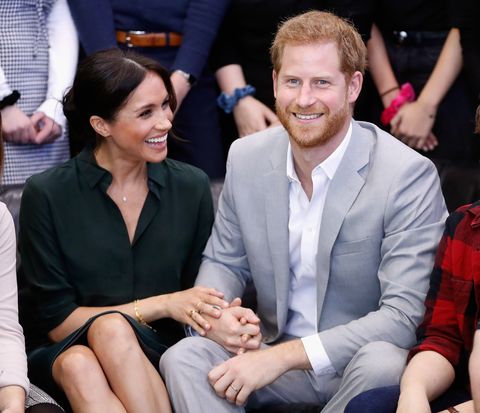 A Google image search for "Prince Harry and Meghan Markle" turns up literally thousands of results. They are probably two of the most-photographed people on the planet. So how could someone choose a favorite amongst all the gorgeous, loved-up photos?

Related Story
How Harry Has Become More Aloof Since His Wedding

If you're a person who takes pictures of them for a living, it's not that hard apparently. Speaking to Insider, photographer Chris Jackson, who has been taking pictures of the royal family for Getty Images for more than a decade, took his personal favorite photo of Harry and Meghan last week during their trip to their namesake, Sussex.

Are you ready for the Best Picture of Harry and Meghan of All Time? Or at least for one guy who spends a lot of time pouring over pictures of the couple's person favorite picture? Here it is:

"Having photographed Prince Harry for so many years as a solo royal, it's been great to capture him with the duchess, two people who clearly share similar passions and are so relaxed and happy together," Jackson said. "I actually took my favorite photograph of the pair during a visit to Sussex [Wednesday] — a lovely interaction as they held hands and burst into laughter during a visit to a youth project."

The photo in question was taken at the Joff Youth Centre in Peacehaven, Sussex on October 3 and Jackson is right — it is an amazing picture of the couple.

Jackson also shared some other insights about the royals during his interview with Insider. Here are some highlights:

"The Duchess of Sussex has really introduced an exciting new dynamic to the royal family. Right from her first official appearance at the Invictus Games in Toronto, she has been relaxed and natural on camera."

"She takes the time to chat to as many people as possible on royal engagements, and it's certainly been exciting for me as a royal photographer to document this exciting time!"

This content is imported from {embed-name}. You may be able to find the same content in another format, or you may be able to find more information, at their web site.
Kayleigh Roberts Contributor Kayleigh Roberts is the weekend editor at Marie Claire, covering celebrity and entertainment news, from actual royals like Kate Middleton and Meghan Markle to Hollywood royalty, like Katie Holmes and Chrissy Teigen.
This content is created and maintained by a third party, and imported onto this page to help users provide their email addresses. You may be able to find more information about this and similar content at piano.io
Advertisement - Continue Reading Below
More From The Ultimate Guide to the Royal Family
A Look Back at Princess Anne's Life in Photos
A Look at Royal Family Portraits Through the Years
Advertisement - Continue Reading Below
Diana's Unearthed Letters to a Friend for Auction
The Queen Hoped Harry & Meghan Would Cancel Exit
Will Is Sad and Shocked by Harry's Reply to Queen
Kim K Is Ready to Move On After Filing for Divorce
Baby No. 2 Might Change Harry's 2021 Travel Plans
Prince Charles Visits Prince Philip in Hospital
Royal Insiders Hope Will Won't Get Harry's Titles
Eugenie Shared Her Son's Name and First Portraits