Today, TMZ reported that Dakota Johnson and Chris Martin—a very lowkey couple that does very lowkey things like go out to dinner together and get matching infinity tattoos and probably listens to a lot of Coldplay together—were expecting their first baby together. According to their report, the couple (who have been together a year) celebrated with friends including Julia Roberts, Sean Penn, and Dakota's parents, Melanie Griffith and Don Johnson, this weekend, throwing a gender reveal party in Chris Martin's backyard.

The big giveaway according to the outlet: Pink and blue balloon arches decorating the event.

Looks like Don was last to arrive ... because about 10 minutes after he got there, the string of blue balloons were released into the sky. So, all signs point to them having a boy, unless someone screwed up the release.

But it turns out someone did, perhaps, screw up the release, because according to Dakota Johnson's rep, the actress is not pregnant and the party was to celebrate her birthday, which was October 4, not a gender reveal, PEOPLE reports. Surprise! Or at least that's probably what Dakota Johnson felt this afternoon when she looked at her phone and saw the news that she was supposedly pregnant. 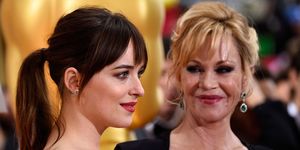 Dakota Johnson on Watching Her Parents Have Sex
This content is created and maintained by a third party, and imported onto this page to help users provide their email addresses. You may be able to find more information about this and similar content at piano.io
Advertisement - Continue Reading Below
More From Celebrity
How Celebrities and Friends Are Supporting Meghan
Meghan Didn't Need Prince Harry to Be Wealthy
Advertisement - Continue Reading Below
Pregnant Emma Stone Runs Errands in Santa Monica
The Queen Reportedly Got Two New Corgi Puppies
Meghan in New Clip: Royal Family Is "Different"
Gwen Stefani Is Unrecognizable In New Insta Post
Lady Gaga Wore Serious Platform Heels in Rome
North West's Pet Lizard Has Its Own SKIMS
Is Harry & Meghan's Archewell Update a Royal Diss?
Why Is the Royal Family Called "The Firm?"