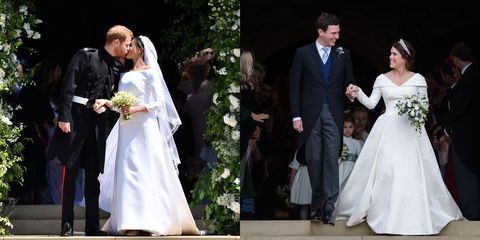 This weekend, the second royal wedding of 2018 captured the world's attention. Princess Eugenie married Jack Brooksbank in a lovely ceremony. In many ways, however, Eugenie's magical day was overshadowed by an event from five months ago—Prince Harry and Meghan Markle's wedding. The two weddings have drawn comparisons since they were announced, and while they were similar in some ways, they were also really unique in plenty of other ways.

So, is it fair to compare the nuptials of two of Queen Elizabeth II's grandkids?

Royal experts say no, it's not really fair, but it was unavoidable.

"I think it is unfair—but inevitable—that Eugenie’s wedding is being compared to Harry’s," Claudia Joseph, author of How to Dress Like a Princess, told MarieClaire.com. "After all, apart from being members of the royal family, the only similarities between their ceremonies are that they were held in Windsor during 2018!"

Indeed, the venue is the biggest similarity (aside from the royal pedigree) between the two weddings.

"While both Harry and Meghan are well-known across the globe—he is the son of Prince Charles and Princess Diana and one of the most popular members of the Royal family and she is an American actress—Eugenie and Jack are not working Royals but lead their lives out of the spotlight and have to earn their own money," Joseph adds.

What makes Eugenie and Harry's weddings so different?

That point about Meghan and Harry being "working royals" is key—it made their wedding an official public, which Eugenie's, technically, was not.

"Although Eugenie's wedding was billed as a private event, rather than a huge public media extravaganza like Harry and Meghan's, it certainly had the same level of glamour and star power in terms of guests," royal commentator Eloise Parker explains to MarieClaire.com "Harry has quite a small circle of friends, while Eugenie and Jack both have normal jobs and are extremely sociable and their guest lists reflected that. Saturday's wedding was a melting pot of aristocrats, socialites, artists, and entertainers."

Why was Eugenie's wedding so huge with so many famous guests then?

Joseph says the star-studded guest lists were also unavoidable, even for Eugenie. Being the granddaughter of the Queen pretty much means that you're going to have to invite royals and celebrities to a huge day like your wedding, whether you're a working royal or not.

"Obviously both are the Queen’s grandchildren and, as such, will invite members of the Royal family and celebrities to their marriages," she says. "But while Meghan is a new member of the Royal family—and put her own unique mark on the ceremony—Eugenie has grown up as the Queen’s granddaughter and was therefore much more relaxed in planning her own family-orientated wedding."

What are the practical differences between Harry and Eugenie's weddings?

So then, the difference between Harry and Eugenie's weddings lies less in the guest list and more in the flexibility Eugenie had with planning her wedding.

"Although both couples invited members of the public and charity representatives to the ceremony, Jack and Eugenie had a couple of hundred more personal friends in their congregation," Parker says. "And while Harry and Meghan had a more traditional reception and evening celebration, Jack and Eugenie were less beholden to tradition and went to town with a full weekend celebration that included a riotous fairground-themed bash."

So, is it fair to compare the year's two big royal weddings? Not really, but experts agree that the comparisons were bound to happen, so don't feel too guilty. You're in lots of royal-obsessed company.

Related Stories
How Similar Was Eugenie's Wedding to Meghan's?
Princess Eugenie Postpones Wedding Thanks to Harry
Kayleigh Roberts Contributor Kayleigh Roberts is the weekend editor at Marie Claire, covering celebrity and entertainment news, from actual royals like Kate Middleton and Meghan Markle to Hollywood royalty, like Katie Holmes and Chrissy Teigen.
This content is created and maintained by a third party, and imported onto this page to help users provide their email addresses. You may be able to find more information about this and similar content at piano.io
Advertisement - Continue Reading Below
More From The Ultimate Guide to the Royal Family
Are Will & Kate Sending a Message to Harry & Meg?
Harry and Meghan Reportedly Have a Four-Book Deal
Advertisement - Continue Reading Below
Rare Photos From Diana and Charles' Wedding
Prince George Looks So Grown-Up in New Portrait
Whatever Happened to Archewell Audio?
Prince Harry Is Set to Publish a Memoir
For Prince George Turning 8 Is a Fashion Milestone
Queen & Philip Made a Pact Not to Mourn Too Long
Diana Was Traumatized by Something Charles Said
Charlotte Will Miss George at Boarding School