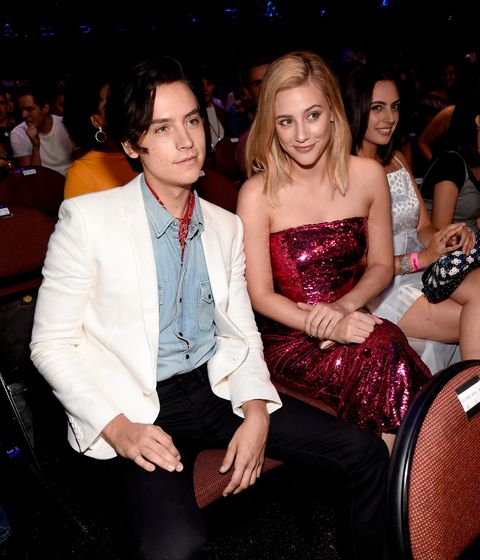 For anyone not religiously watching Riverdale, Lili and Cole play Betty Cooper and Jughead Jones on the hit CW show and their love (both onscreen and off) is shipped 'round the Riverdale fandom. Rumors that Lili and Cole were a thing IRL have been circulating since at least mid-2017, but the actors were very secretive about their relationship status for a long time.

In the fall of 2017, Cole gave a cryptically vague answer when asked about the relationship:

By spring of this year, however, keeping the open secret must not have been worth it anymore because Lili and Cole confirmed they were dating in April by stepping out in Paris together, holding hands and kissing. In May, they attended the 2018 Met Gala together.

Lili and Cole came out on the other side of the secret Hollywood relationship wormhole with a very good sense of humor about all the questions they've had to endure.

Last night, Lili shared a shirtless picture of Cole on Instagram, which she captioned, "I hope you don’t mind."

Obviously, no one minds. At all. Keep them coming, Lili. Cole jumped in to the pic's comments, jokingly trolling their own relationship secrecy and the fan reaction to it by writing, "Are you guys dating?"

The magic was captured by Comments by Celebs:

View On Instagram
Related Stories
Cole Sprouse & Lili Reinhart Confirm Relationship
Here's Why Lili and Cole's Relationship Is Secret
Kayleigh Roberts Contributor Kayleigh Roberts is the weekend editor at Marie Claire, covering celebrity and entertainment news, from actual royals like Kate Middleton and Meghan Markle to Hollywood royalty, like Katie Holmes and Chrissy Teigen.
This content is created and maintained by a third party, and imported onto this page to help users provide their email addresses. You may be able to find more information about this and similar content at piano.io
Advertisement - Continue Reading Below
More From Celebrity
Meghan Discussed Her Daughter in Vax Live Speech
Prince Harry Talks Digital Pandemic at Vax Live
Advertisement - Continue Reading Below
Harry and Will Have Been Arguing for Months Now
Prince Harry Doesn't Regret His Oprah Interview
Archie Has a Distinct American Accent, Apparently
Hailey Wore a Nude Blazer and Micro Dress
Gabrielle's TikTok About Her Prom Date is So Funny
Victoria Beckham Shuts Down 'Spice World 2' Rumors
Kendall Jenner Shared Her Experience of Anxiety
'The Voice' Star Blake Shelton Opens Up About Gwen