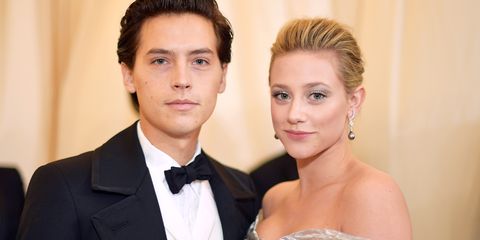 A little backstory: Riverdale fans have been shipping Cole and his costar/onscreen love interest, Lili Reinhart since the first inklings of Bughead becoming a thing. Speculation that Lili and Cole were dating mounted, with fans clinging to any evidence they were, you know, together together. In May, after months of dodging questions about their offscreen relationship status, Lili and Cole went red carpet official at the Met Gala, which is a pretty good event to go red carpet official at.

Now that they're more or less open about the fact that they're a couple (even though they're still famously private about the details of the relationship), Lili was able to make a girlfriend rite of passage and wish Cole a happy birthday on social media. She did one better, trolling him adorably, in a post reminiscent of the style of expert couple trolls Blake Lively and Ryan Reynolds.

First, the straight-forward, just sweet Instagram post. "It seems as if the world would still be a stranger to me, if not for you. I’m so thankful that our paths intertwined to form this beautiful adventure~ Happy birthday, my love," Lili wrote, alongside picture of Cole.

On Twitter, she was a little more salty than sweet—but in a hilarious kind of way.

"Happy birthday to the princess, and also to Meghan Markle," Lili tweeted, along with a screenshot of famous August 4th birthdays that put Meghan and Cole side-by-side.

Happy birthday to the princess, and also to Meghan Markle. pic.twitter.com/I5XmErut9b

Kayleigh Roberts Contributor Kayleigh Roberts is the weekend editor at Marie Claire, covering celebrity and entertainment news, from actual royals like Kate Middleton and Meghan Markle to Hollywood royalty, like Katie Holmes and Chrissy Teigen.
This content is created and maintained by a third party, and imported onto this page to help users provide their email addresses. You may be able to find more information about this and similar content at piano.io
Advertisement - Continue Reading Below
More From Celebrity
Emma Watson Stunned at the Earthshot Prize
Kate "Didn't Have Much Energy to Bond" With Meghan
Advertisement - Continue Reading Below
Blake Lively Trolled Ryan Reynolds Again
Kourtney Kardashian and Travis Barker Are Engaged!
See Kate Middleton's Subtle Environmental Look
Prince George "Adored" Seeing Dinosaur Fossils
Kate Middleton Borrows The Queen's Fashion Trick
Princes Charle and William "Competing" Over Causes
Lilibet May Be Christened in California After All
The Sweet Family Photos in Prince William's Office