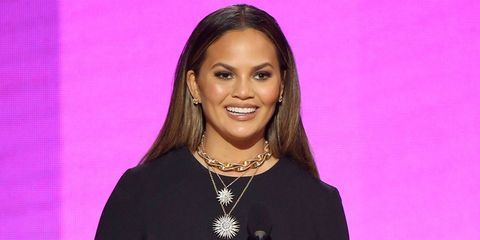 Chrissy Teigen issued a hilarious apology regarding her hard-to-control twin-slit dress and accidental wardrobe malfunction from the 2016 American Music Awards. But that wasn't good enough for one fan, who tweeted a suggestion at Chrissy during a Thanksgiving-themed Twitter Q&A on Tuesday. The model's response made it clear that she is over critiques of the outfit.

"@chrissyteigen could've just wore [sic] pants," a user named Alivia wrote. But Chrissy clapped back with a complaint of her own in video form. "Well, Alivia, hindsight is 20/20," she said. "Just like your mom when she named you with an 'A' instead of an 'O.'"

The fan didn't take too much offense to Chrissy's joke, however, tweeting back, "Getting Roasted by Chrissy. One more thing checked off the bucket list! @chrissyteigen THANK U."

The fan jibes didn't end there, though. "What happened to being a lady?" a commenter named Sean Lad asked, to which Teigen responded jokingly, "I am pretty sure you could clearly see I'm a lady."

Lad ran with it, writing, "No, you're a woman, not a lady. A lady doesn't speak like you do or dress that way." Chrissy came back with sarcasm. "Oh Sean, I wake up every day just wanting to please you," she declared in another clip. "I'm so sorry I disappointed you. I don't know what I can say but, wow, I apologize. I didn't mean it to happen. But sorry, Sean. Sorry."

But Chrissy didn't have to go it alone on the defense. Her husband John Legend also chimed in on the clothing gaffe. "Honestly, we were worried there might be that moment, so we checked it," he told Extra on Tuesday. "We were watching her walk. I was like, 'It looks good. Looks like all is well.' But obviously, if a photographer is resourceful enough, they can find that one moment…The photographer had to get the exact, perfect angle. I love the dress and I thought it was great."

More praises for Chrissy came in the form of the dress's designer, Yousef Akbar. "I had no idea she was due to wear it," he told the Daily Mail of Chrissy's AMAs ensemble. "I was delighted. Chrissy was the person I envisaged wearing such a dress! … Someone with her personality and her confidence is perfect for [it]. … To me, Chrissy wore the creation perfectly."

For Chrissy's sake, let's move past this now. You could hardly see anything in the first place except her flawless bod.