Last month, the internet had a lot of thoughts about Keira Knightley’s interview with Ellen DeGeneres, in which she revealed that she’s banned her own daughter from watching a selection of Disney movies. The actress left Disney fans shaken to the core, as she explained how 3-year-old Edie isn’t allowed to watch Cinderella. Edie can forget singing along to Under The Sea, too, as The Little Mermaid is also an absolute no-go in the Knightley-Righton household. It’s all down to their representation of women, explained Knightley, and the fact that she doesn’t want her daughter to watch a princess who “waits around for a rich guy to rescue her.”

It’s fair to say that opinion was divided on her parenting choice, but Knightley (no stranger to a controversial comment) stands by it. This week, she appeared on the red carpet for her magical new movie, The Nutcracker and the Four Realms (which is—you guessed it—a Disney movie), where she spoke further on the matter. And you’ve got to be honest, she’s thought about it in great detail and really considered her princess dynamics.

"I just wonder what Elsa would say to Ariel and Cinderella, because Elsa has some serious opinions about Anna going off with a guy that she’s only just met and saying she would marry him," Keira told Press Association. "She's like 'absolutely that is not OK' and in fact everyone in Frozen is not OK with that.”

The mom-of-one went on: "What would Elsa say to Ariel, who gives up her voice for a man? A man, by the way, she has only seen dance round a ship and then drown!"

"It’s 100 per cent amazing of Ariel to save the guy, I’m totally up for that, but what would Elsa make of that? I think Elsa would be like: 'Babe, you’ve got to get to know him better, don’t give up your voice just yet.'"

While some fans acknowledge that Knightley may have a valid point, others argue that they grew up watching Cinderella, Snow White and Ariel, and still managed to live their own proud, feminist lifestyle under their influence. Either way, I’m mostly just curious to know whether Elizabeth Swan and Pirates of the Caribbean passes the test. 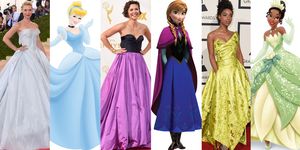 50 Celebrities Channeling Disney Princesses
Lucy Wood Contributor Lucy Wood spends most of her time writing about celebby things, reading books, and waiting for the glorious day that she have enough millions for a pet sloth.
This content is created and maintained by a third party, and imported onto this page to help users provide their email addresses. You may be able to find more information about this and similar content at piano.io
Advertisement - Continue Reading Below
More From Celebrity
Comparing the Two Biggest Royal Weddings
Kate, George, and Charlotte Were Seen Shopping
Advertisement - Continue Reading Below
J.Lo Shares First IG Photo Post A-Rod Split
Harry Has Experienced "Frostiness" from Royals
Billie Eilish Just Debuted a Bouncy Blonde Blowout
Gigi Shared an Adorable Spring Selfie With Khai
Katie Holmes Posted a 15th Bday Tribute to Suri
Chrissy Teigen Talked Stigma Around Infertility
Beyoncé Stuns in a Mesh Dress With Matching Gloves
Lizzo and Chris Evans Had the Best IG Interaction