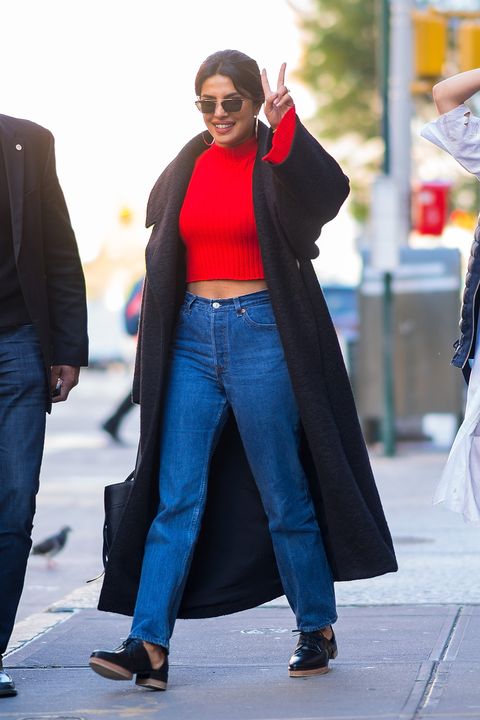 We still don't know exactly when Priyanka Chopra and Nick Jonas plan to tie the knot, but it has to be soon because Priyanka is hitting all of her pre-wedding milestones.

Last week, two of Priyanka's closest friends (but not Meghan Markle—boo) threw her a gorgeous bridal shower at Tiffany's in New York. The party went down at the at the Blue Box Cafe inside Tiffany’s flagship store, which is appropriate, since Nick bought Priyanka's enormous engagement ring from Tiffany's too.

Now, Priyanka has moved on to her next pre-wedding bash: Her bachelorette party. While Priyanka hasn't confirmed where the festivities are being held, People notes that the pictures she's been posting on Instagram from the weekend appear to have been taken in Amsterdam.

Priyanka's bachelorette party was definitely a destination event. On Friday, she shared a photo on her Instagram Story that confirmed she was leaving Los Angeles, at the very least. (The photo, of her dog sitting in a car, was captioned, "Bye Bye LA"—so it's not a guess to say that she left LA for the party.)

Priyanka wore a white, off-the-should sweater with feathers that was very reminiscent of the feathery Marchesa gown she wore to her bridal shower in NYC.

Nick's mom and Priyanka's future mother-in-law, Denise, made it known that she's keeping an eye on the Instagram record of the big weekend. She commented on Priyanka's kick-off 'gram, "Be good." Comments by Celebs captured the magical comment, naturally:

Here are some more of the best pictures and videos from the weekend, and you can follow the excitement yourself on Instagram, since Priyanka's friends seem to be documenting the festivities with the hashtag #pcsbachelorette.

Sophie Turner shared this amazing picture of Priyanka decked out in a classic bachelorette sash:

Priyanka gave Sophie a piggyback ride (in heels) and it was captured on video, thankfully:

The need for the piggyback ride is probably best summed up by these videos:

Priyanka's bachelorette has also been marked by glam decadence:

This party, like everything else about Priyanka's engagement, looks amazing.

Kayleigh Roberts Contributor Kayleigh Roberts is the weekend editor at Marie Claire, covering celebrity and entertainment news, from actual royals like Kate Middleton and Meghan Markle to Hollywood royalty, like Katie Holmes and Chrissy Teigen.
This content is created and maintained by a third party, and imported onto this page to help users provide their email addresses. You may be able to find more information about this and similar content at piano.io
Advertisement - Continue Reading Below
More From Celebrity
Andra Day Stuns in a Gray Chanel Couture Gown
The Sussexes Have Made a Huge Change to Archewell
Advertisement - Continue Reading Below
Emma Corrin Thanks Princess Diana at the Globes
Best Reactions to Jason Sudeikis' Globes Speech
Kaley Cuoco Wore a Princess Dress to Globes
Your First Look at Harry & Meghan's Oprah Special
Best Celebrity Instas from the 2021 Golden Globes
J.Lo Looks Impossibly Stunning In a White Swimsuit
What Margot Robbie Wore to the Globes
Katie Stuns in a Leather Jacket and Baggy Jeans