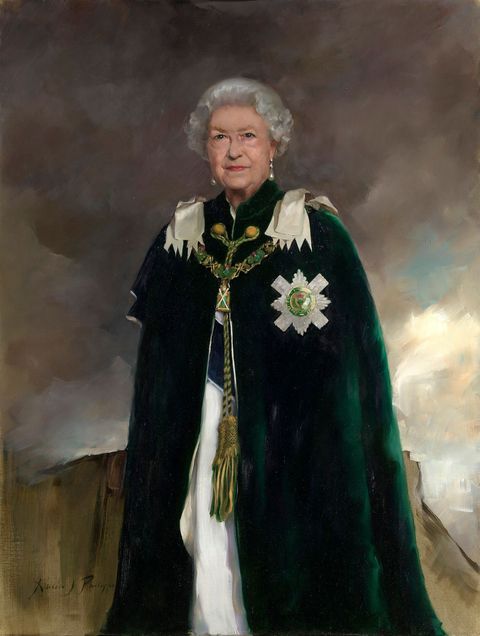 Pop quiz: Is it possible for Queen Elizabeth II to look more regal than she does on a daily basis?

Answer: Yes. Yes it is and the new official portrait of the 92-year-old monarch is all the proof you need of that. The new portrait of Elizabeth looks like something right out of a history book. In the painting, the Queen wears her velvet green grand ceremonial robes, along with the Order of Thistle collar, featuring a pendant of St. Andrews (which is the highest order of chivalry in Scotland, according to The Cut).

The incredible work of art will be on display in the Royal Dining Room at Holyrood House in Edinburgh, Scotland, but we can't help but kind of hope that the royal family loans it out to a museum and that museums sends it on an international tour.

The talented artist behind the stunningly regal portrait is British painter Nicky Philipps, who is a favorite artist of the royal family. Philipps is known in royal-loving circles for painting the first double portrait of Prince William and Harry in 2010 and she had already painted Queen Elizabeth twice before completing her most recent work of royal art.

On November 30, Elizabeth viewed another portrait of herself (seen above), which was commissioned by the RAF Regiment to celebrate its 75th anniversary. She was photographed looking at the painting in the White Drawing Room at Windsor Castle.

The RAF Regiment painting, created by artist Stuart Brown, depicts Elizabeth looking more everyday regal, wearing a modern blue dress and a brooch, which shows the Astral Crown and crossed Lee Enfield rifles, that was presented to her by the RAF Regiment.

Soooooo...when is the Museum of Queen Elizabeth portraits opening?

Did Prince Philip Cheat on Queen Elizabeth?
Queen Elizabeth Has Tweeted Her First Tweet
Kayleigh Roberts Contributor Kayleigh Roberts is the weekend editor at Marie Claire, covering celebrity and entertainment news, from actual royals like Kate Middleton and Meghan Markle to Hollywood royalty, like Katie Holmes and Chrissy Teigen.
This content is created and maintained by a third party, and imported onto this page to help users provide their email addresses. You may be able to find more information about this and similar content at piano.io
Advertisement - Continue Reading Below
More From The Ultimate Guide to the Royal Family
See an Adorable New Sussex Maternity Shoot Photo
Why Is the Royal Family Called "The Firm?"
Advertisement - Continue Reading Below
Prince Harry: The Queen Was Advised Not to See Me
The Palace Had Concerns About Archie's Skin
Harry Says Racism Was "A Large Part" Of Leaving
A Look Back at Princess Anne's Life in Photos
A Look at Royal Family Portraits Through the Years
Meghan and Harry Share a Sweet Home Video
Prince Harry: "I Think My Mum Saw It Coming"
Meghan Markle Reveals She Had Suicidal Thoughts