Geri Horner (that's Ginger Spice to you) is really excited for the upcoming Spice Girls reunion coming in the summer of 2019. She's so excited, in fact, that she posted a photo of the group's very first photoshoot on Halliwell's Instagram. As first spotted by the Daily Mail, the five aren't yet the superstars they're destined to become, and it's an adorable and hilarious throwback to '90s fashion.

Halliwell captioned the photo: "'Come on girls let's do a photoshoot.'" She explains she suggested the idea by bringing them to "this kooky photographer I knew."

Just...just take it all in for a moment. Look at the "trying too hard to be sexy" eyes-to-the-right poses. Victoria Beckham/Posh Spice has the pencil-thin eyebrows that I apparently was emulating when I tweezed mine into oblivion as a kid. We can start to see glimpses of their now-famous personas (pigtails on Ginger, tiny braids on Melanie C/Sporty Spice, the most blunt bob ever on Posh) but they're SO YOUNG and fresh-faced. Apparently they're all just 20-24 in this photo, with no idea how big they're about to become.

Originally the group was planning a six-date tour, but they increased it to 13 because of the huge demand from fans. While we wait with excited anticipation—summer 2019 is still months away—news continues to trickle in. There have been rumors, but no confirmation, that the Spice Girls might headline the enormously popular Glastonbury Festival in 2019.

Victoria Beckham shared the upsetting news she won't be joining the rest of the group on tour but said she'd absolutely be watching. "I think the girls are going to do a great job! I'm really excited for them, they have great plans," she said. Fans suggested Adele become the new fifth member after she posted a hilarious throwback photo showing how much she's a Spice Girls megafan.

Same, Adele. Same. Posh Spice or not, I'm ready for this reunion. 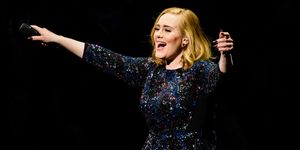 Watch Adele Have a Total Spice Girls Moment
Katherine J Igoe Katherine’s a Boston-based contributing editor at Marie Claire online who covers celebrity, fashion, entertainment, and lifestyle—from “The Bachelor” to Everlane to Meghan Markle.
This content is created and maintained by a third party, and imported onto this page to help users provide their email addresses. You may be able to find more information about this and similar content at piano.io
Advertisement - Continue Reading Below
More From Celebrity
Kate Beckinsale Shows Abs In Bikini Video
Natalie Portman Reacts to Hemsworth's Muscles
Advertisement - Continue Reading Below
The Scooter Braun Dig in Ryan Reynolds' New Ad
Eugenie Shopped at Kate's Favorite Maternity Store
J.Lo's Ex Told Her to Get Botox at 23
Miley Said She and Liam Had "Too Much Conflict"
Prince Charles' Life in Photos
Prince George's Favorite Meal Is Very Grown-Up
Selena Felt "Bullied" by SBTB's Kidney Jokes
The Queen and Philip Are Breaking Royal Tradition