Serena Williams has a ton to be happy about this year. She has an adorable family and a successful clothing line, and the Women's Tennis Association (WTA) just announced two rule changes based on Williams' recent tennis games at the French Open. To celebrate, Williams shared a photo of her and her daughter Olympia relaxing on a beach—it's not clear where, based off the photo, but it's obviously sunny and warm. The photo was snapped by Williams' husband and Olympia's dad, Alexis Ohanian. They must be getting their holiday relaxation started early, and it looks amazing.

According to People, the WTA altered their “Special Ranking Rule,” which means that a player can hold a special ranking for up to three years after having a baby or otherwise starting a family. Williams returned from maternity leave to find that she had fallen from first to...number 451. Ouch.

The second alteration was to officially allow "leggings or compression shorts without a skirt, dress or shorts over them.” Williams now wears a black catsuit during competition, which she said helps reduce her risk of blood clots. Williams had struggled with blood clots during the birth of Olympia, but the French Open complained about the look and said it would “no longer be accepted” after the 2018 games.

Meanwhile, Williams didn't comment explicitly on the good news but made it clear where her priorities lie—with her family, and with rest and recovery before she next competes in the Mubadala World Tennis Championship December 27-29.

Earlier in the week, Williams twinned with her daughter in matching watermelon-colored outfits, saying she'd "waited my whole life" for this moment.

Related Stories
Serena Williams and Her Daughter are the Sweetest 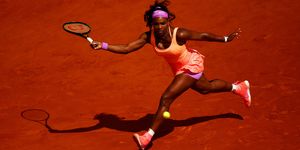