Serena Williams and Roger Federer, also known as the queen and king of tennis, have 43 Grand Slam titles between them. The world eagerly watched as the two faced off in doubles for the first time ever at the Hopman Cup in Perth. Federer and his partner Belinda Bencic won 2-1 against Williams and her partner Frances Tiafoe, per Buzzfeed News. But the most exciting part of the match wasn't the outcome but the highly anticipated reactions that the two pros would have after meeting together on the court.

As the Tennis Channel Twitter video shows, the two are clearly delighted to be in each other's presence and won't stop saying nice things about each other. "I'm kind of sad it's over," said Williams. "I was just warming up!" On a more serious note, she explained that she and Federer basically "grew up together" over the course of their impressive and long tennis careers. "I watch him all the time, but I never knew how amazing [his serve] was." She added, "Hopefully I can get some tips!"

Federer complimented Williams as well, saying, "I was nervous returning [Williams' serve] because it's a wonderful serve and you just can't read it!" He added, "Yours is a bit better [than mine]."

"It was great fun and she is a great champion," he concluded.

It's clear as day that @SerenaWilliams and @RogerFederer had a ball facing off in mixed doubles. #HopmanCup pic.twitter.com/5B7YRloHzx

The two players hugged and chatted after the match, even posing for an amazing selfie. Serena shared the pic later on her Instagram, captioning the photo, "🐐vs 🐐. The 🐐 won." (That's the goat emoji in case you're unfamiliar, short for "greatest of all time" in this case.) She's perhaps hinting that they both won just by matching up together, and by representing the sport so well.

Federer also shared the same photo, captioning it "Oh what a night🎾🔥." Stay classy, you two. (Oh, and play more tennis together, please.) 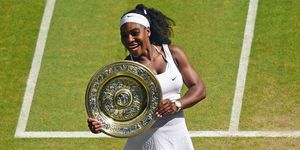