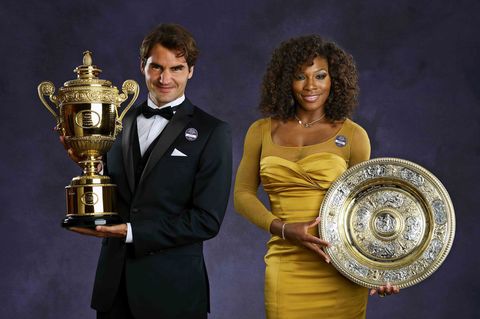 In a match up that feels fully cinematic, tennis greats Serena Williams and Roger Federer will face off on the court for the first time ever tomorrow in a match at the Hopman Cup in Perth.

Between them, Williams and Federer have won 43 grand slam singles titles. They're both considered to be among the greatest players of all time. But, thanks to the gendered nature of tennis match-ups, the two legends have never played each other. Until now.

Now, it's worth noting that this isn't a full-on recreation of the 1973 man-versus-woman competition between Billie Jean King and Bobby Riggs (which was dramatized in last year's Battle of the Sexes, starring Emma Stone as King and Steve Carrell as Riggs). The New Year's Day match between Williams and Federer will be a doubles game, with each of them teaming up with another player of the opposite sex for the match. Williams will play alongside her US teammate, Frances Tiafoe, and Federer is partnering with Belinda Bencic, according to CNN.

Williams described the opportunity to share the court with Federer as being "like a dream come true."

"I have been looking forward to it, this is so cool," she added.

Federer is also excited about the match.

"It's very exciting for us," he said."I admire everything she has done on and off the court. I have always thought what it was like to return that serve and go head to head with her."

One thing we know for sure is that it will be a good game—and we can only hope Serena's daughter, the ever-adorable Alexis Olympia, will be in the stands cheering her mom on.

View On Instagram
Kayleigh Roberts Contributor Kayleigh Roberts is the weekend editor at Marie Claire, covering celebrity and entertainment news, from actual royals like Kate Middleton and Meghan Markle to Hollywood royalty, like Katie Holmes and Chrissy Teigen.
This content is created and maintained by a third party, and imported onto this page to help users provide their email addresses. You may be able to find more information about this and similar content at piano.io
Advertisement - Continue Reading Below
More From Celebrity
Jennifer Lopez and Ben Affleck: Everything We Know
Harry & Oprah's Mental Health Doc Has a Title
Advertisement - Continue Reading Below
Serena Williams Might Miss the Tokyo Olympics
Jennifer and Ben Have "Unreal" Chemistry Together
The Sussexes Marked Archie's Bday in a Lovely Way
Queen's Cousin Accused of Selling Access to Putin
Meghan Wore a Meaningful Necklace for Vax Live
How Celebrities Are Celebrating Mother's Day 2021
Gabrielle and Kaavia's Mother's Day Pic is So Cute
Ben Affleck's Moving Tribute to Jennifer Garner