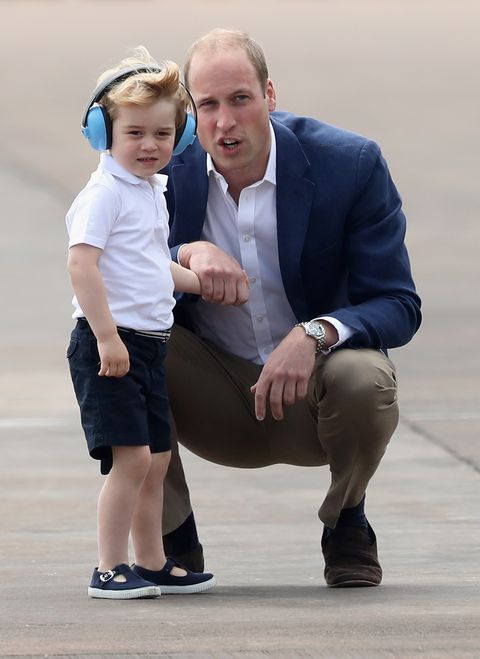 Parents live to keep their kids happy and that includes royal parents, too. Keeping five-year-old Prince George happy involves exactly one thing, apparently: Never, ever forget to get him a toy helicopter if you have the chance to.

George's dad, Prince William, revealed this little tidbit in a light-hearted moment during one of his royal engagements this week.

Following a recent visit to the Air Ambulance Charity in London, Prince William was presented with an array of gifts—including a toy helicopter, which the Duke of Cambridge said he would absolutely have to take home to little George.

"I can't get back without a helicopter; George will never forgive me," Will joked. Even though the comment was clearly playful and not serious (it seems highly unlikely that George would actually hold a lifelong grudge against anyone, least of all his own dad, for forgetting a toy on a business trip), George does have a reputation as a helicopter and airplane lover.

During a trip to Hamburg, Germany in 2017, shortly before his fourth birthday, George made headlines and melted hearts around the world when pictures of him looking absolutely in awe of the helicopters on the airstrip made the rounds. A quick reminder:

In December, Will also hinted at George's obsession with helicopters during a visit to the Royal Air Force (RAF) station in Cyprus with Kate Middleton. "I told George this morning we were going to see the pilots today, and he said, ‘If you see a helicopter can you take a picture?'" Will revealed.

Since Will was a helicopter pilot in the RAF himself, we'll consider this a case of like father, like son. 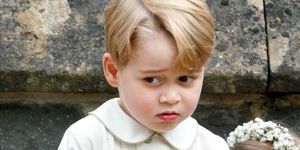 Why Prince George Cried at Pippa's Wedding
Kayleigh Roberts Contributor Kayleigh Roberts is the weekend editor at Marie Claire, covering celebrity and entertainment news, from actual royals like Kate Middleton and Meghan Markle to Hollywood royalty, like Katie Holmes and Chrissy Teigen.
This content is created and maintained by a third party, and imported onto this page to help users provide their email addresses. You may be able to find more information about this and similar content at piano.io
Advertisement - Continue Reading Below
More From The Ultimate Guide to the Royal Family
Comparing the Two Biggest Royal Weddings
How the Queen Ends Awkwardly-Long Handshakes
Advertisement - Continue Reading Below
The Queen Has a Rule Against Bad Talking Family
The Queen Took a Pic of Philip With Her to Funeral
The Queen's Tolerance Was the Key to Her Marriage
Will & Kate Welcomed Harry Back Into Their Group
Queen Left a Handwritten Note on Philip's Coffin
The Queen Said Grief Is the Price We Pay for Love
All of the Photos from Prince Philip's Funeral
The Queen Wore This Brooch to Philip's Funeral