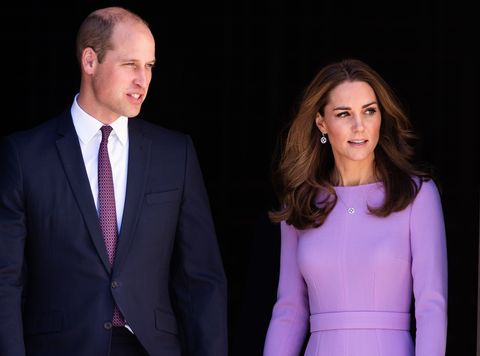 Even the best and strongest couples have their share of problems. For Prince William and Kate Middleton, most of those problems happened early in their relationship, when Will was infamously on the fence about staying with Kate.

Before their well-known 2007 breakup, the couple took a brief "trial separation" in 2004, during their final year at St. Andrews University, where they first met while both attending school.

Express reports that royal author Katie Nicholl, wrote about the mini-split in her 2010 book, William and Harry. According to Nicholl, Will knew he wanted to take a break from the relationship and planned a boys-only yachting holiday in Greece as a chance to spend some time away from Kate.

"Kate was beginning to question William’s commitment to their relationship, and she also had her own creeping doubts about their future after St. Andrews," Nicholl wrote, according to Express.

So, why was Kate questioning the relationship? According to Nicholl:

"A number of things had caused her to question William’s commitment, although she had not raised them with him yet. One was William’s friendship with an American heiress called Anna Sloan."

Apparently, Will and Anna had a lot in common and Kate was worried that their connection might include some romantic feelings, at least on Will's part. Express quotes Nicholl as writing:

"Anna had lost her father, businessman George Sloan, in a tragic shooting accident on the family’s 360-acre estate in Nashville, and she and William had bonded over the loss of their parents. When Anna invited William and a group of friends to Texas for a holiday before he went to Greece, it hurt Kate deeply. She suspected William might have feelings for the 22-year-old heiress."

Nicholl reports that nothing romantic ever happened between Will and Anna, who eventually married Eddie Smith and attended Will and Kate's wedding as a guest.

"Anna was not the least bit romantically interested in William, and the friendship was never anything more than just that," Nicholl wrote.

Related Stories
Prince William Says He and Kate Are "Naughty"
Will and Kate Broke a Royal Wedding Tradition
Kayleigh Roberts Contributor Kayleigh Roberts is the weekend editor at Marie Claire, covering celebrity and entertainment news, from actual royals like Kate Middleton and Meghan Markle to Hollywood royalty, like Katie Holmes and Chrissy Teigen.
This content is created and maintained by a third party, and imported onto this page to help users provide their email addresses. You may be able to find more information about this and similar content at piano.io
Advertisement - Continue Reading Below
More From The Ultimate Guide to the Royal Family
Will and Kate Attend the ‘No Time to Die’ Premiere
Harry Carries Briefcase That Reads "Archie's Papa"
Advertisement - Continue Reading Below
Meghan Markle and Prince Harry Arrive in NYC
Princess Beatrice Reveals Daughter's Name
How Meghan & Harry Spent Their 2-Year Anniversary
Charlotte Has Two Major Milestones Coming Up
Kate Made a Very Common Shoe Shopping Mistake
The Queen Is Lawyering Up, Apparently
Harry & Meghan Are Still Close to the Queen, TYVM
Archie Inspired Harry and Meghan to Take a Stand