Today's Top Stories
1
What Wearing Purple on Inauguration Day Means
2
What Biden Has Pledged to Do In His First 100 Days
3
Moving Forward: A Better Future for Caregivers
4
Listen to the Best New Love Songs of 2021 (So Far)
5
Poet Amanda Gorman's Ring Is Full of Meaning
Paul ArchuletaGetty Images

Chelsea Clinton is an activist and author, following in the footsteps of her famous parents Hillary and President Bill Clinton. She grew up in the spotlight and has taken on several causes that hold personal meaning for her, most recently with her newest children's book She Persisted Around the World. And now Clinton has more good news, which she announced officially on Twitter and was reported by People: She's pregnant with her third child.

Clinton married hedge fund executive Marc Mezvinsky in 2010 and has two children already, Charlotte, 4, and Aiden, 2. In the post, Clinton explained that "Marc and I have loved watching Charlotte be such a wonderful big sister and we’re excited to watch Aidan become a big brother!" Her due date is apparently later in the summer of this year.

Marc and I have loved watching Charlotte be such a wonderful big sister and we’re excited to watch Aidan become a big brother! We cannot wait to meet our newest addition later this summer.

Farther down the thread, a fan comments that her parents must be thrilled, and she responds,"Thank you! They are :)" So now we know how Bill and Hillary feel about becoming grandparents for the third time (no surprise there)!

Clinton has spoken positively about becoming a mother in the past. "“I didn’t know I could care more intensely about anything until I became a mom,” she told People. “Somehow I love my husband even more, I love my parents even more. I feel even greater urgency about the work that I do, particularly around women and girls being a mom of a daughter.”

Clinton's also discussed the importance of promoting women's rights for the next generation through her work as a writer. "We need more stories of women around the world—not only for girls anywhere, although that too, but for kids here in the United States." 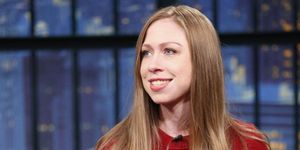 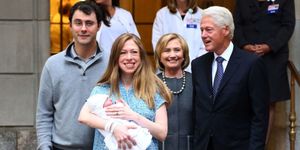 Chelsea Clinton Is Expecting Her Second Child
Katherine J Igoe Katherine’s a Boston-based contributing editor at Marie Claire online who covers celebrity, fashion, entertainment, and lifestyle—from “The Bachelor” to Everlane to Meghan Markle.
This content is created and maintained by a third party, and imported onto this page to help users provide their email addresses. You may be able to find more information about this and similar content at piano.io
Advertisement - Continue Reading Below
More From Celebrity
Joe Biden Follows Chrissy Teigen on Twitter
J.Lo Wore Head-to-Toe Chanel for the Inauguration
Advertisement - Continue Reading Below
The Queen Sent a Private Message to Joe Biden
Lady Gaga's PDA with Boyfriend Michael Polansky
Twitter Reacts to Lady Gaga at the Inauguration
Lady Gaga Gave a Powerful Inauguration Performance
Lady Gaga Brings the Drama to D.C.
Chrissy Accidentally Spilled Inauguration Secrets
Meghan's Lawyers Slammed Publication of Her Letter
William's Private Secretary Quits After 10 Months