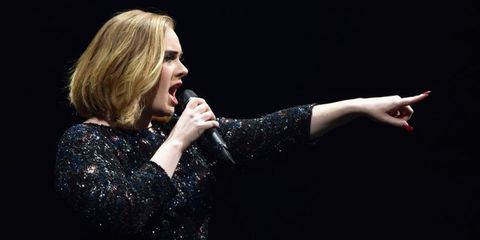 Adele and Beyoncé have a lot in common: They both go by their first names, they're both gorgeous humans, and they both know Bey should've won Album of the Year at the Grammys!

Now, Adele has taken to the stage at her Melbourne concert to pay homage to her friend, Queen Bey, with an impersonation for the ages:

[instagram align='center' id='BRyAMz6AQUG']earlier in the evening, she told the audience if they were there for a good time, that was their mistake, adding that the concert is, "basically just two hours of crying and songs about my ex-boyfriend."

As someone who has cried along to Adele songs in my car more than I've done pretty much anything else in my life, I can say that most definitely qualifies as a good time. A good, cathartic sob in your automobile to Adele is basically the best thing about being alive.

Laura Beck Laura Beck is a Los Angeles-based TV writer and frequent contributor to Cosmopolitan.com — her work has appeared in the New York Times, New Yorker, Jezebel, and the Village Voice.
This content is created and maintained by a third party, and imported onto this page to help users provide their email addresses. You may be able to find more information about this and similar content at piano.io
Advertisement - Continue Reading Below
More From Celebrity
Chrissy Teigen Opens Up About Her Loss
A Look Back at Gwen Stefani & Blake Shelton's Love
Advertisement - Continue Reading Below
Serena Williams Shows Off Toned Body In BTS Photos
See a Romantic New Photo from Beatrice's Wedding
Harry Was Treated as a "Spare" by the Royals
Cardi B Called Out Racist Reactions to Her Birkins
Emily Ratajkowski Is Pregnant With Her First Child
Blake Lively Reacts to Gossip Girl's Identity
Harry Said He Didn't Understand Unconscious Bias
Joe Jonas Took a Stroll With Daughter Willa