3
Fall Sweaters to Snuggle Up In
4
We Should Have Known About J.K. Rowling's Views
5
The Oral-B iO Toothbrush Replacing My Dentist RN
Chris JacksonGetty Images

Prince Harry and Meghan Markle are getting ready for all things baby. Wouldn't it be amazing to be a fly on the wall as they do major rehab on their new home Frogmore Cottage, get that vegan paint-covered nursery ready, and eat healthily, all while doing royal engagements at the same time? (At least they don't have to have a baby shower.) Both parents-to-be are cool under stress, so they're probably taking it in stride. But Prince Harry was also spotted engaging in a little stress relief as the countdown to baby gets into its final stage. Namely, he went to his favorite pub and grabbed a pint.

Per Us Weekly, The Sands End is Harry's pub of choice (it's owned by his godfather), so that's where he went. He was joined by a security team, but the whole affair sounded like it was very casual. Contrary to rumors, it appears that Meghan hasn't asked to Harry give up alcohol. Surprise!

Not spotted? Meghan herself (she was last spotted with Harry at The Sands End in 2016, so he's definitely taken her there). But to me, that means just about nothing. The married couple can and should spend time apart and still be going strong—see also, they're having a baby together.

Also, Meghan has been hitting the engagements for her new patronages hard this year, and she deserves a night off to put her feet up and relax. Considering that she has an engagement scheduled for today, she deserves it.Besides, Harry and Meghan regularly visit pubs and other locales with drinks on their tours, including the Crown Pub in Belfast.

So, it's just a case of Harry relaxing before The Big Day.

Related Stories
Prince Harry Is on a Royal Wedding Diet 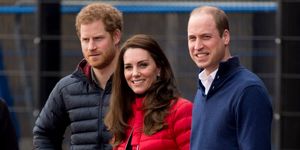