Harper Beckham is only seven, but she already has a much cooler life than me. Being the supportive family member that she is, she attended her mom Victoria Beckham's London Fashion Week show with her dad, David Beckham, and other family members. While she was sitting quietly in the front row, waiting for the show to start, she was placed directly next to Vogue editor-in-chief Anna Wintour. And fans immediately noticed that they looked like they were rocking a VERY similar haircut.

David Beckham immediately (jokingly) put it up to a vote of "Who wore it better" on his Instagram stories. Apparently someone had a sense of humor about the whole situation, using the gift of Photoshop to show what David would ALSO look like if he rocked that trendy hairdo. He smartly explained he couldn't compete with his two more stylish seatmates.

In all seriousness, I love Harper's do and think she looks amazing, regardless of whether or not she meant to channel the fashion icon. Here's a close-up of Harper's blunt, stylish bob:

Harper also attended with her famous siblings, as seen here:

Looks like her entire family has the fashion bug! 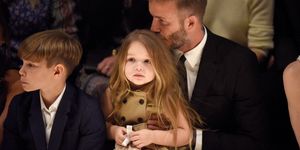