Where were you when you saw those Orlando Bloom naked paddleboarding photos? He and then-girlfriend Katy Perry were gallivanting around Italy last summer when he decided to strip down to his birthday suit and do some private paddleboarding, which ended up not being private at all.

Since then, Orlando and Katy have split, with Orly reportedly linking up recently with actress Nina Dobrev. Katy had kept silent about the whole paddleboarding incident until Wednesday on the Sydney morning show Kyle & Jackie O. 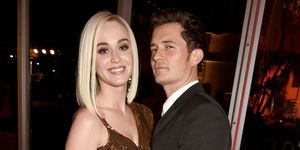 The singer, who's in town to perform at the finale of The Voice Australia, had been chatting with the hosts about therapy (which she underwent during her extremely candid Witness album release weekend livestream) when they steered her toward Orly's paddleboard moment. Katy naturally had a sense of humor about it: "Hahaha! That's a great segue from therapy! I've had a lot of therapy about that moment actually."

"He asked me if I wanted to be [naked] and I was like, 'ah no…'," Katy shared. But it wasn't as though she wasn't down to go au naturel later on during the day:

"You know when you're dating someone sometimes, it's exciting to be like, 'Oh, should we try and make out over here in this place' or what have you, and I was just not in the mood. I saved it for the boat!"

As for why Orlando decided to go nude in the first place? He'd originally just wanted to play around with the folks present—but as Twitter master Katy saw it, he inadvertently caused one of the biggest social media storms of the year:

"He wanted to show off for the people on the shore. He thought it was funny!...Oh oh, it was SO funny because I was explaining Twitter and social media to him for weeks because he had taken a break and then all of a sudden he was like trending number one on Twitter!"

There you have it!

This content is created and maintained by a third party, and imported onto this page to help users provide their email addresses. You may be able to find more information about this and similar content at piano.io
Advertisement - Continue Reading Below
More From Celebrity
Gwen and Blake Are Going Through a Rough Patch RN
Screaming at Brad & Jen Reading This Steamy Scene
Advertisement - Continue Reading Below
Gigi Hadid Shared Stunning New Baby Bump Photos
Chrissy Accidentally Revealed the Sex of Her Baby
A Brief History Lesson on Brad and Jen
Taylor Did Her Own Hair and Makeup for the ACMs
The Queen's Private Pain After Diana's Death
Lizzo Sent Cardi B the Sweetest Gift
Chrissy Got Super Candid About Pregnancy
Gigi Hadid's Dad Hints That She's Given Birth