Today's Top Stories
1
BLM Has Failed Female Sexual Assault Survivors
2
Every Woman Should Own These Tanks
3
What's Going on With 'The Bachelorette'?
4
Japanese Clothing Brands to Add to Your Closet
5
The It-Girl Style of the Summer: Goddess Braids
Getty Images

Lady Gaga took the stage at New York City’s Apollo Theatre last night for an epic, invite-only show, and while talking about Pride month, revealed to the audience an important lesson she's learned. From behind her piano, Gaga began by speaking about World Pride, which will be celebrated in NYC this weekend. “So, it’s World Pride Week... I personally think Pride should exist 365 out of the year, but I’ll take a f***ing global week,” she began.

Gaga added: “I’ve learned something very important to ask people now…'What is your pronoun?’” she explained. “'Cause for a lot of people, it’s really hard and their pronoun is not respected, or they are not asked. And for me, I’ve grown and changed over the years in a lot of different ways. I’ve felt misunderstood in different ways. All our hardships are different, I don’t mean to compare, I just mean to say: We are in this together.”

Gaga of course also took a moment to speak about the importance of the 50th anniversary of the Stonewall uprising. “That was when our community said enough is enough and all hail to so many, including Miss Marsha P. Johnson," she said of the transgender activist who is credited for having thrown the first brick that started the uprising. "What bravery, what courage. In this spirit of acceptance, the spirit of tolerance, the spirit of courage to be seen as you see yourself.”

The intimate, invite-only show celebrated the merger of SiriusXM and Pandora, and marked Gaga’s first performance at the iconic Harlem venue. The night, which was condensed version of her current "Enigma" Las Vegas residency, was also packed full of Gaga’s celebrity friends, from Neil Patrick Harris and Adam Lambert, to Camila Mendes and Catherine Zeta-Jones.

Want to listen to the concert for yourself? Then we've got some good news: It will be airing on SiriusXM and Pandora this weekend. 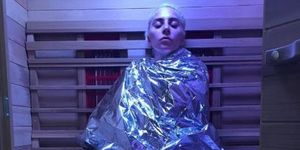