Sad news from Miley Cyrus: the singer and famed animal lover has lost her pet pig, Pig Pig, according to her Instagram stories. "Very sad to say...my dear friend Pig Pig has passed away...I will miss u always," she captioned a cute video of Pig Pig snaffling an apple and oinking merrily. "thank you for so many laughs and good times girl," Miley added. Pig Pig has been part of Miley's family since August 2014, according to People, when she adopted her after losing her dog Floyd.

And the two shared a major career moment in 2015: Pig Pig covered Paper magazine with Miley, both singer and pig naked and coated in mud.

It’s been a heartbreaking few days. This is what’s left of my house. Love. Many people in Malibu and surrounding areas in California have lost their homes also and my heart goes out to everyone who was affected by these fires. I spent the day in Malibu yesterday and it was amazing to see the community pulling together to help each other out in any way they can. Malibu is a strong community and this event is only going to make it stronger. Thankful for the all the great local guys that helped keep smaller fires out around my property. I love u guys. I love you Malibu. Thank you to all the hero firefighters around California. It’s going to be a journey to rebuild. Stay strong all. To help/donate visit @malibufoundation and @happyhippiefdn

"I call him my survival partner now," she continued. "He thinks it’s not romantic, but I learned that it is. It is why you pair up with someone, for survival. He was so incredible—he got all the animals out in his truck. He put two pigs in crates, which I tell you is so hard." Apparently, Miley attempted to crate the pigs by spraying them with a hose, but Liam's method of simply chasing them in was more successful.

Miley and Liam started the process of rebuilding their home this week, according to Radar Online, obtaining a permit to drill and excavate the remains of their house. Let's hope Pig Pig is smiling down on the process, chomping on as many apples as her heart desires. 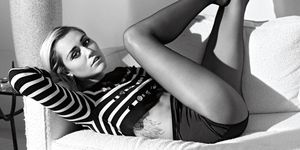