Margot Robbie's role in Quentin Tarantino's latest, Once Upon a Time in Hollywood, can't have been the easiest: She plays Sharon Tate, the rising actress murdered by the Manson Family in 1969, while she was over eight months pregnant. In an interview with Harry Smith on Today, Margot revealed just how far she went to connect with the tragic star—she wore some of Sharon's jewelry, provided by her sister, Debra Tate.

Margot explained that she knew very little of Sharon's life when she accepted the role—only the horrifying circumstances of her death. "I was never really exposed to the parts of her life when she was alive, and that was kind of a beautiful part of taking on this role—spending so much time with that aspect, and really appreciating her life as opposed to just knowing about her death," she said.

Calling Debra Tate "such an advocate for keeping the memory of Sharon alive," Margot said wearing Sharon's jewelry was "an amazing opportunity that if it wasn’t for Debra wouldn’t have been possible."

But "other times she just made me feel so happy because I know she was happy and wonderful," Margot continued. "For the most part she was an absolute joy, but yes, there were moments when it was very sad."

Director Tarantino faced some criticism at the Cannes Film Festival for Margot's role, as one reporter asked why she was given so few lines in the movie. "I reject your hypothesis," he responded, while Margot defended him, saying, "I think the moments on screen show those wonderful sides of [Sharon Tate] could be adequately done without speaking," as the Guardian reports. 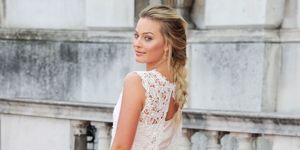 Margot Robbie Wore Her Mother's Wedding Dress
Emily Dixon Emily Dixon is a British journalist who’s contributed to CNN, Teen Vogue, Time, Glamour, The Guardian, Wonderland, The Big Roundtable, Bust, and more, on everything from mental health to fashion to political activism to feminist zine collectives.
This content is created and maintained by a third party, and imported onto this page to help users provide their email addresses. You may be able to find more information about this and similar content at piano.io
Advertisement - Continue Reading Below
More From Celebrity
40 Strict Rules the Royal Children Have to Follow
Megan Thee Stallion Stuns With Neon Pink Hair
Advertisement - Continue Reading Below
Phoebe and Pete Wore Matching Initial Necklaces
The Queen to Sit Alone at Prince Philip's Funeral
Royals Announce Who Will Attend Philip's Funeral
Prince Philip Will Not Have a State Funeral
Harry Doesn't Want Drama at Philip's Funeral
How Meghan Feels About Missing Philip's Funeral
Eva Longoria Loves Her Mini Trampoline
The Royals Won't Wear Uniform at Philip's Funeral