Today's Top Stories
1
24 Hours With Diipa Büller-Khosla
2
Get (Financially) Well Soon!
3
The 2021 Book Releases You Don't Want to Miss
4
The Boots Brands Fashion Girls Are Obsessed With
5
This PMD Device Is on Super Sale on Amazon
Jon KopaloffGetty Images

Selena Gomez is officially back on the market, romantically speaking.

The 27-year-old singer says she's finally ready to date again after taking two-year hiatus from romance following what she describes as a "toxic" relationship. Not that she's naming names about the ex or anything...

During an interview for the Zach Sang Show, released on Friday, Gomez got brutally honest about the events (and relationship woes) that led to her two-year withdrawal from the dating scene:

"You're in a phase of life where you experience love for the first time and I think that can just be just a little toxic. You have this codependency that you think is love and then you have this addiction to the passion and the frustration with each other that you think, 'Oh, that's love,' or fighting or doing all this stuff, 'Oh that's love,' and I believed that for a long time. So I've been super, super single for two years and I want to know what the love will look like next for me."

Gomez didn't call out any ex in particular during the interview, but she did give some hints with her timeline. She says that she's been "super, super single" for two years—which seems to be a case of rounding up, since she and her infamously on-again, off-again ex, Justin Bieber, were last linked romantically in March of 2018.

It has been roughly two years since Gomez ended her relationship with The Weeknd—and since the last time Bieber and Gomez rekindled their romance, both of which happened in fall of 2017. Not long after his and Gomez's final split, Bieber got back together with another ex, Hailey Baldwin—whom he married in a courthouse ceremony last fall ahead of their lavish wedding in front of family and friends this August.

Taking the time she has to be alone has also given Gomez clarity about what she does want from her next relationship:

Watch the interview yourself below: 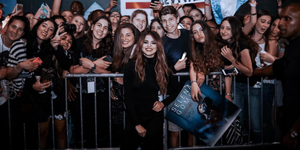