The 33-year-old actress took to Instagram on Valentine's Day to share her big news, along with a photo of her absolutely ginormous diamond engagement ring. In addition to her impressive rock, the photo also featured another person's hand—presumably belonging to Bynes' fiancé.

On Saturday, Bynes returned to Instagram with a new selfie, featuring her and a mystery man, who many now assume to be her still-unidentified fiancé. Why do the great people of the internet think this mystery man is Amanda Bynes' future husband, you wonder? As it so often does on Instagram, it all comes down to the caption, which, in this case was a single, simple word: "Lover."

After sharing her "lover" selfie, Bynes went on a bit of an Instagram blitz, sharing an incredibly random photo of her legs and feet in a car:

Followed by a captionless solo selfie:

And finally, a photo that appears to be from an engagement celebration with friends, captioned with a single black heart emoji:

If fan account speculation is correct, the other women in the final photo may actually be Bynes' future in-laws. One fan account on Instagram reshared the photo and explained in the caption that it depicted the actress "getting acclimated into her fiancé’s new family they seem to be nice and friendly."

Since Bynes still hasn't officially confirmed the identity of her fiancé, we'll just say congratulations again to her and her future spouse—whether it's this mystery "lover" or turns out to be someone else entirely. 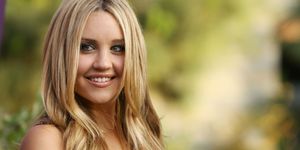 Amanda Bynes Gave Her First Interview in Years
Everyone Can Relax, Taylor Swift Isn't Engaged
Kayleigh Roberts Contributor Kayleigh Roberts is the weekend editor at Marie Claire, covering celebrity and entertainment news, from actual royals like Kate Middleton and Meghan Markle to Hollywood royalty, like Katie Holmes and Chrissy Teigen.
This content is created and maintained by a third party, and imported onto this page to help users provide their email addresses. You may be able to find more information about this and similar content at piano.io
Advertisement - Continue Reading Below
More From Celebrity
The Queen Has a Rule Against Bad Talking Family
The Queen Took a Pic of Philip With Her to Funeral
Advertisement - Continue Reading Below
The Queen's Tolerance Was the Key to Her Marriage
J.Lo "Likes" Shady IG Post After A-Rod Split 👀
Beyoncé Shares Photos of Her White Power Suit
Will & Kate Welcomed Harry Back Into Their Group
Queen Left a Handwritten Note on Philip's Coffin
The Queen Said Grief Is the Price We Pay for Love
All of the Photos from Prince Philip's Funeral
The Queen Wore This Brooch to Philip's Funeral