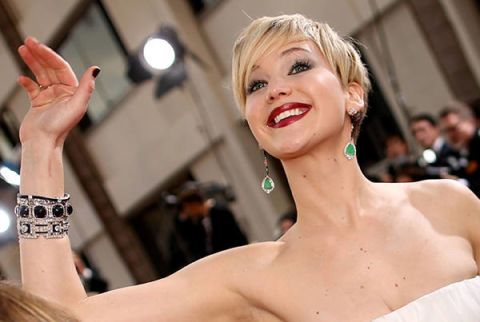 Because Jennifer Lawrence won the Golden Globes last night, here's her every move documented. Apart from bathroom breaks, that is.

1. Starting as she meant to go on, J.Law crept up on Taylor Swift during her red carpet interview with Ryan Seacrest and photobombed the hell out of her:
2. She then told Taylor she'd planned to push her down the stairs. TSwift giggled and said something like "oh I wish you would" and then JLaw did and Taylor Swift rolled down the stairs a la Showgirls' Cristal Connors (minus the nipples) and landed in a puddle of raw sewage. OK no, but can you imagine? Don't you want to imagine?

3. Then her bracelet fell off during her own chat with Seacrest.

4. And before putting it back on, J.Law whipped it around like it was a lasso. A multi-million dollar bejeweled lasso. Someone had clearly been listening to Ke$ha's hit "Timber" on her limo ride to the awards.

5. Let's also take this moment to address her Christian Dior gown. Did it make her look like Disney's Princess Ariel just washed up on the shore? Or maybe just a tampon? Opinions were varied.

6. Most importantly, Colton Haynes dressed up and made the dress a meme. This is the best thing Colton Haynes has ever done, and that's a high bar considering his resume includes many shirtless Teen Wolf moments:

#GoldenGlobes were a blast

8. Oh, and then PETS WERE INVOLVED TOO:

9. J.Law then made it into the building, and featured in the hilarious opening monologue from hosts Tina Fey and Amy Poehler. She laughed along, even when they joked she'd become "a bitch" to work with:

10. But then she got serious, because she won out in the Best Supporting Actress category for her role in American Hustle. She was shocked! (But not TSwift shocked though; perhaps they hadn't gotten as far as sharing tips on giving :O face in their text message convos yet.)

11. She gave a sincere and lovely acceptance speech where she discussed falling in love with director David O. Russell's work and falling in love with most of her fellow nominees too. Sort of; says J.Law: "I actually did watch all of the movies this sea — not all them, but you know what I mean."

12. Here's a lovely photo of her with the trophy:
13. She sat with her on/off boyfriend Nicholas Hoult during the ceremony. Presumably they are "on" at the moment, because they kissed and it was just lovely:

14. And for the remainder of the Globes broadcast, cameras cut to Lawrence and caught her consistently with her wine glass in hand. Checklist for the night: hot British boyfriend, gold statuette, pinot grigio. Sounds PERFECT. And that's just J.Law, isn't it?

18 Times Celebs Acted Like Real People at the Globes

The Best Dressed of the 2014 Golden Globes

Alex Rees Deputy Editor of News I’m the news director here at Cosmopolitan.com, and I could really use a cup of tea right now.
Advertisement - Continue Reading Below
More From Best of the Red Carpet 2020
The Best Looks of the Oscars After-Parties
Did You Spot Charlize Theron's Hidden Hair Detail?
Advertisement - Continue Reading Below
Timmy Photobombed Margot on the Oscars Red Carpet
Leonardo DiCaprio's Oscars Date Is...Not His Mom
Saoirse Ronan Debuted Micro Bangs at the Oscars
Charlize Theron Wore a Sexy Thigh-High Slit Dress
The Most Gorgeous Beauty Looks at the 2020 Oscars
Oscars Red Carpet Looks We Love
Zendaya Is Bulgari's New Face
Sel Was Pretty in Pink at Hollywood Beauty Awards