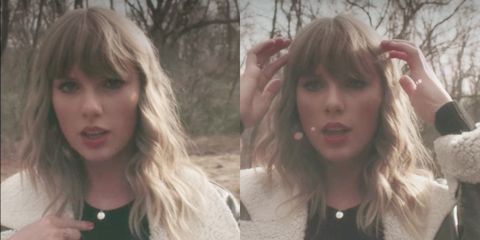 Taylor Swift just dropped a second music video for her single "Delicate" and although it's super different from the first, it still features some dancing. Because Swift is all about the dance, these days.

The vertical video, which dropped exclusively on Spotify, and you can watch in full on the service, seems to be a personal message to Swift's boyfriend, Joe Alwyn. From blowing kisses to the camera, to pointing out the necklace featuring his initials, the one-take video plays like a love letter.

It's satisfying to have a quieter take on the song, and when viewed alongside the first, way more dramatic, music video, it feels much more intimate and honest.

.@taylorswift13’s new video for #Delicate is out now only on Spotify 🙌 Watch it now on This Is: Taylor Swift Playlist https://t.co/Lam89692xh pic.twitter.com/uVCiNx7wfg

Swift's move to give Spotify a video exclusive shows that the singer is back on good terms with the streaming service. The "Look What You Made Me Do" single famously boycotted Spotify over royalties, but ended her feud in June 2017. The timing of Swift's return to the streaming giant seemed suspicious to many, as it happened to coincide with the release of Katy Perry's new album, and totally eclipsed her rival.

Swift's first video for "Delicate" grabbed everyone's attention for its elaborate dance routine. In the mini movie, Swift seemed to berate her life as an uber rich, famous person, as she was surrounded by a team of security guards that followed her every move, and she was attacked by a crazed fan in a theater.

Together, the pair of music videos give us a bigger insight into the meaning of the song, and Swift's relationship with boyfriend, Alwyn.