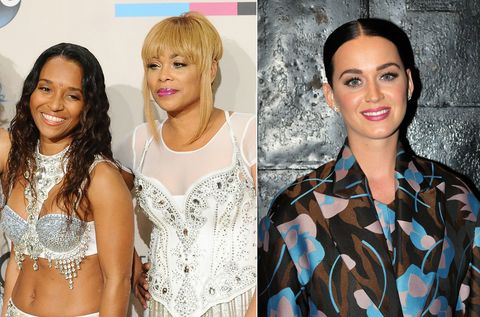 Someone's got FanMail coming her way.

TLC supporter Katy Perry pledged $5,000 to the girl group's Kickstarter, which has already surpassed its $150,000 goal by $23,590 with 28 days to go. To ensure their final album is made "completely on our own terms, without any restrictions," the legendary now-duo is turning to crowd-funding to cover the costs of "working with the best in the business."

I get off the plane 2 find out not only did we reach our goal but we're the fastest MOST FUNDED POP PROJECT IN #KICKSTARTER HISTORY! Thx 💋😝💋

A BIG Special THANK YOU 2 @katyperry for her pledge to our #Kickstarter Campaign! ❤️❤️❤️💋👍👍👍👍 Your awesome!

According to Kickstarter, KPer's donation comes with some ace rewards, including a signed vinyl, a dance-class video, a TLC scrapbook, and a slumber party in LA with T-Boz. Oh, to be a fly on the wall at that sleepover.

Great Thing of the Day: Katy Perry Belts Out 'All by Myself' in Her Cheeto Costume