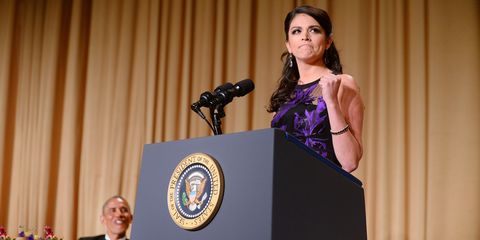 This weekend, Saturday Night Live's Cecily Strong traded Studio 8H for the Washington Hilton, where she roasted President Obama and his prospective successors before a room full of bigwigs at the White House Correspondents' Dinner (also affectionately/appropriately called "Nerd Prom").

Below, her best jokes from the hilarious night—oh, and an honorable mention to that time she made the entire room vow, "I solemnly swear not to talk about Hillary [Clinton]'s appearance because that is not journalism."

Watch the whole thing below, which we highly recommend:

While you're at it, you should watch the President's remarks, too, because there's an awesome special surprise at the 14:37-minute mark:

If You Missed 'SNL', Do Yourself a Favor and Watch Kate McKinnon as Justin Bieber