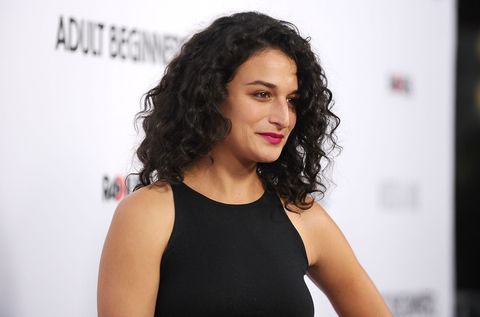 Best buddy comedy ever? According to Entertainment Weekly, Jenny Slate and actress Ari Graynor are teaming up for a pilot in which they'll play two New York friends who drive across the country after making a movie together.

If you're not yet enticed, behold: The show will be a reunion for Slate, writer/director Gillian Robespierre, and producer Elisabeth Holm, all of whom helmed the amazingness that was Obvious Child. Robespierre wrote the pilot and Holm will direct, with the three—including Slate—serving as executive producers.

The pilot is described as being "like Thelma and Louise—but nobody dies," and begins shooting in New York City, like, now.

2) Can Marcel the Shell make a cameo? Maybe in a weed/alcohol-induced fever dream?

3) Honestly, we're just hoping Graynor reprises the amazing drunk girl character she did with such aplomb in Nick and Norah's Infinite Playlist, and which deserved all the awards, because that would just be the best.

'Obvious Child' Is the Rom Com We've All Been Waiting For

Samantha Leal Senior Web Editor I'm Sam, the senior editor at MarieClaire.com.
This content is created and maintained by a third party, and imported onto this page to help users provide their email addresses. You may be able to find more information about this and similar content at piano.io
Advertisement - Continue Reading Below
More From Celebrity
William Will Suffer "Worst" from Harry's Memoir
Simone's Boyfriend Sent Her the Sweetest Message
Advertisement - Continue Reading Below
Harry's Friends Don't Want to Be in His Memoir
Will & Kate's Modern Approach to Raising George
Meet Simone Biles's Super Supportive Parents
What Happens on Katie's Season?
Bennifer Recreated Their 2002 PDA Moment
Why Harry's Memoir Release Date Has Upset People
The Royals Are Worried About Prince Harry's Memoir
Gabrielle Union Debuted a New, Short Haircut