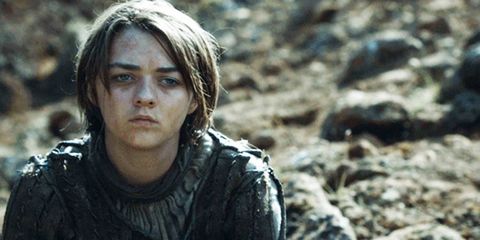 Unless you live on a desert island, you know that something truly terrible happened on the season finale of Game of Thrones, because Twitter exploded in an unmitigated torrent of outrage and despair (and because you read our awesome recap, obvs). But just to cover our butts, SPOILER ALERT, stop reading if you haven't somehow haven't seen it yet, etc. etc.

So when Maisie Williams, AKA Arya Stark, did a Twitter Q&A on Monday, the inevitable question of how she dealt with this blow came up.

After all, Snow and Stark had a special, half-sibling bond. Remember when he gave her Needle? *SOB*.

But, it's all going to be okay, because if there's one thing we know about Jon Snow, it's that he always comes through.

http://carloscaicedo.tumblr.com/post/121687054245/no-worries
Advertisement - Continue Reading Below
More From Celebrity
36 Celebrity Couples Who Love Some PDA
Ben Affleck Is Blond Now
Advertisement - Continue Reading Below
A Timeline of Charles and Diana's Relationship
Kendall Jenner Wants to Work for Beyoncé
Harry & Jon Bon Jovi Sing Together at Royal Event
Khloé Kardashian Is Being Trolled Over Febreze
A 'Friends' Reunion Special Is Coming to HBO Max
Katie Holmes Is in Head-to-Toe Chloé at Their Show
Ariel Winter Now Has Strawberry Blonde Hair
46 Stars Who Dated Before They Were Famous