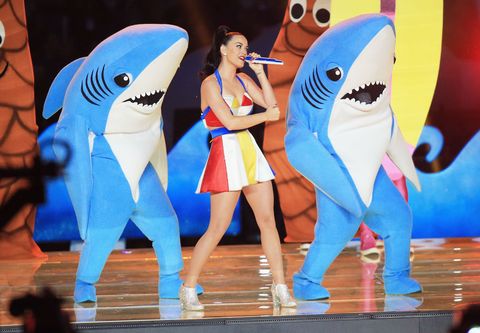 If you were to replace Jamie Dornan with Katy Perry in the Fifty Shades trailer (I approve this message), she would be all, "Oh, I owe my success to #LeftShark" in that scene where Anastasia Steele "interviews" her for her school paper.

Perry, who was nominated for an "Outsanding Short-Format Live-Action Entertainment Program" Emmy yesterday, tweeted her gratitude to one very important member of her Super Bowl team without whose half-assed moves she never could have triumphed over the combined forces of Beyoncé and Taylor Swift.

Um...Woke up to my first Emmy nomination for the Halftime show!!! V proud of everyone involved especially #leftshark pic.twitter.com/DhD4rRlEFO

The halftime show's choreographer *has* said Left Shark was meant to be the Tweedledee to Right Shark's straight man, so it is nice he is finally receiving some commendation for a job well done—besides the meme avalanche and the iPhone cover, that is.