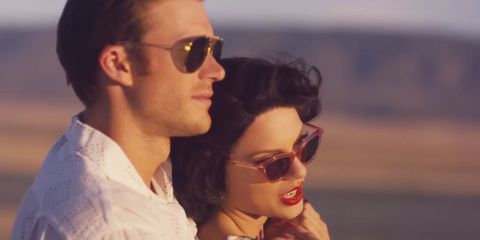 Update, 9/3: In response to an NPR story written in response to Taylor Swift's "Wildest Dreams" video, which seems to have been made in response to this summer's dearth of too-catchy, unifying music, director Joseph Kahn has given a statement defending his work.

"'Wildest Dreams' is a song about a relationship that was doomed, and the music video concept was that they were having a love affair on location away from their normal lives," Kahn said in a statement addressing the accusation that the visuals present "a glamorous version of the white colonial fantasy of Africa." "This is not a video about colonialism but a love story on the set of a period film crew in Africa, 1950."

"The reality is not only were there people of color in the video, but the key creatives who worked on this video are people of color. I am Asian American, the producer Jil Hardin is an African American woman, and the editor Chancler Haynes is an African American man," he said. "We cast and edited this video. We collectively decided it would have been historically inaccurate to load the crew with more black actors as the video would have been accused of rewriting history. This video is set in the past by a crew set in the present and we are all proud of our work."

A lot to think about, which is in itself refreshing given that, in the end, this is a pop song we're talking about here.

Update, 8/30: The video has been released, and it is so good. Co-starring Scott Eastwood, the vid features wildlife, fake sets, and Tay as a brunette. Even better, all proceeds from the video will be donated to wild animal conservation through the African Parks Foundation of America. So, naturally, you need to watch:

Update, 8/29: If you're anything like us, you're *so* excited to see what Taylor Swift brings to the table tomorrow night with her new music video. The film for her single "Wildest Dreams" is set to premiere at the VMAs—and if the teaser clip she posted last week wasn't enough, the singer has shared another sneak peek of the magic that's in store for us all. The outtake says it all: retro glamour, hot guys, and Taylor Swift in a killer wardrobe.

Update, 8/24: Not wanting to miss the opportunity to make Noah's Ark a trend, Taylor Swift hired a dove and stampeding zebras to represent the passage of time in her video for "Wildest Dreams." She also hired Scott Eastwood to play her love interest—he has just come off The Longest Ride, in which he wears a cowboy hat and looks like the type of vanilla good ol' boy Taylor Swift would see and go "I should hire him to play my next love interest."

The full video, in all its pre- and post-deluge glory, will air during the MTV Video Music Awards Pre-Show on Sunday at 8:00 p.m.

Original story, 8/5: This is Taylor Swift and not Godard we're talking about here, so, like "Shake It Off" and "Blank Space" and  "Style" and "Bad Blood," we're going to take a stab at predicting the concept for the music video. And we'll probably be right. Again.

Late Tuesday, the magnanimous ex-boyfriend sharer announced her next single to great fanfare.

Calling it now: There will be a cookie-cutter attractive man like one of these driving a car, Tay Tay wearing a dress and red lipstick staring at the sunset, some oblique reference to sex, and lots of slo-mo. Unless she surprises us all and goes conceptual.

That'll be the day.

Chelsea Peng I'm Chelsea Peng, the assistant editor at MarieClaire.com.
This content is created and maintained by a third party, and imported onto this page to help users provide their email addresses. You may be able to find more information about this and similar content at piano.io
Advertisement - Continue Reading Below
More From Celebrity
Meghan Said She Was "In Tears" Over Her BLM Speech
Chrissy Teigen Couldn't Hear Her Baby's Heartbeat
Advertisement - Continue Reading Below
Taylor Swift Fans Troll Jake Gyllenhaal on IG
Meghan Shared a Quote She Displayed in Her Room
Duchess Kate Spots Sleek Sportswear for Outing
Brooke Shields, 55, Shows Off Toned Legs On Insta
Amanda Seyfried Gave Birth to Her Second Child
Chrissy Teigen Received Two Blood Transfusions
Attenborough's Gift to George Sparks Controversy
Meghan and Harry Respond to Reality Show Rumors