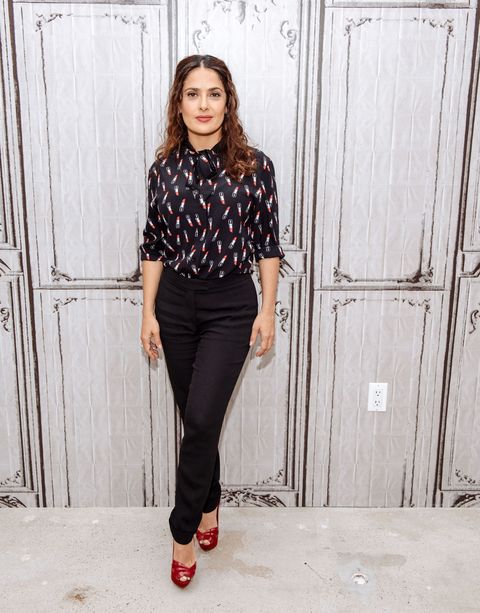 Like Cara Delevingne and Amanda Seyfried and Rose McGowan, Salma Hayek is adding her perspective to the conversation about being female in Hollywood. (Previous topics covered: the pay gap, the old man/young girlfriend problem, how movies are more male, white, and straight than you thought.)

Speaking with HuffPost Live, the would-be astronaut expanded on her recent AP story, in which she said she "doesn't really care" that studios aren't calling her anymore.

"They don't like somebody who has an opinion on the script," she said. "They want a girl to come in and be quiet and look pretty and do as the say, and it's just not in my nature."

"It's hard. They go by stereotypes. Sometimes it's hard to put me in a box. Even though I am so many things specifically and proudly, in their head, I'm not quite the typical Latin woman, in many ways, or the typical Arab woman, or the typical American woman, so it's hard for them to pin me."

So what did she do? Produce and act in Kahlil Gibran's The Prophet herself. BOOM. *slow clap*

This content is imported from Third party. You may be able to find the same content in another format, or you may be able to find more information, at their web site.
Chelsea Peng I'm Chelsea Peng, the assistant editor at MarieClaire.com.
This content is created and maintained by a third party, and imported onto this page to help users provide their email addresses. You may be able to find more information about this and similar content at piano.io
Advertisement - Continue Reading Below
More From Celebrity
How Much Did Prince Harry Inherit From His Mother?
Amanda Gorman Says a Security Guard "Tailed" Her
Advertisement - Continue Reading Below
Meghan and Harry Share a Sweet Home Video
Harry Left Royal Family Due to "Lack of Support"
Why Prince Harry Asked the Royal Family for Help
Prince Harry: "I Think My Mum Saw It Coming"
Prince Charles "Stopped Taking" Harry's Calls
Harry & Meghan's Tell-All: Everything You Missed
Meghan and Harry's California Home: What We Know
Meghan Markle Is Having a Girl This Summer