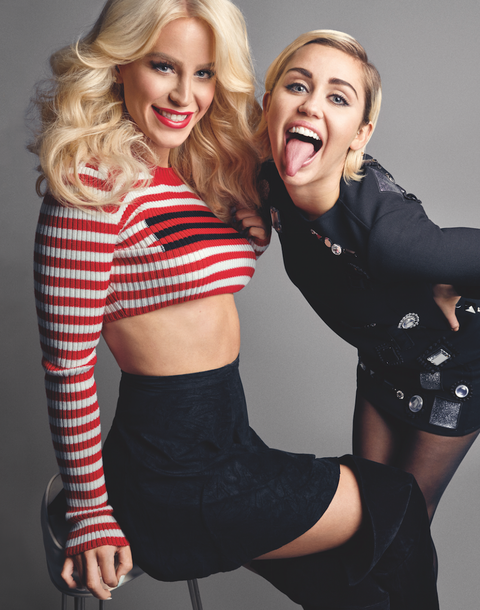 You may know Gigi Gorgeous as a successful vlogger, but she also happens to be thisclose to superstar Miley Cyrus—something she never saw coming. But such is the life of an outspoken trans advocate who's chosen to star in Cyrus' #InstaPride campaign, which debuted earlier this summer and featured profiles and shots of transgender and gender non-conforming individuals to raise awareness for the Happy Hippie Foundation.

The now-tight duo teamed up again on the set of Cyrus' Marie Claire cover shoot, where Gigi got in front of the camera and Miley behind the lens. We caught up with the up-and-comer to talk about the transgender community of today, who she considers her own role model, and what it was like on set with Miley Cyrus.

Marie Claire: This feels like such a huge moment in history as it relates
to trans and identity. What do you think of all the attention being paid to the community?

Gigi Gorgeous: I think it's amazing—honestly bottom line *amazing.* I do think it's long overdue; we've been out here for a while and kind of creating our own things, but it's so great to see the spotlight that's being shone on this community. And Miley Cyrus is just...what an incredible woman, to take her time and show just how passionate she is about everyone being accepted and finding their place. She's shedding a light, and it's inspiring to see how the moment is really now.

Miley and Gigi playing around on set, photographed by Mark Seliger

MC: You've talked a bit about the #InstaPride campaign, but is that where you met Miley for the first time?

GG: Yes! Everyone, I think, was a little nervous in the beginning, but after awhile it was fun and exciting.

MC: Was there anyone's story you were particularly drawn to?

GG: I think Brendon's story really was special to me. He's so young and it was just really special to see him there with his family.

MC: What was it like being on set with Miley for our September cover shoot?

GG: That was insane—I was not expecting that at all, but she hit me up and was like, "We're going to take some pictures." I didn't know what to expect, but it ended up being just so creative and super fun. I think the images Miley ended up taking of me turned out artsy and cool and I'm honored to be a part of it all. She's so carefree, but so professional. Just totally in her element. I admire her so much.

MC: You're such a role model for so many, especially as part of this campaign. Is there anyone you look up to?

GG: Caitlyn Jenner is someone I look up to a lot—I think she is a powerful force and really such a huge part of history now. What she's done and what she's achieved—she's such a strong force.

Samantha Leal Senior Web Editor I'm Sam, the senior editor at MarieClaire.com.
This content is created and maintained by a third party, and imported onto this page to help users provide their email addresses. You may be able to find more information about this and similar content at piano.io
Advertisement - Continue Reading Below
More From Celebrity
Bennifer Recreated Their 2002 PDA Moment
Why Harry's Memoir Release Date Has Upset People
Advertisement - Continue Reading Below
The Royals Are Worried About Prince Harry's Memoir
Gabrielle Union Debuted a New, Short Haircut
J.Lo Made Out With Ben on IG for Her 52nd Birthday
Harry Is Putting the Queen in a Difficult Position
Are Will & Kate Sending a Message to Harry & Meg?
Harry and Meghan Reportedly Have a Four-Book Deal
Naomi Osaka Lit the Olympic Cauldron in Tokyo
John Legend Performed "Imagine" for the Olympics