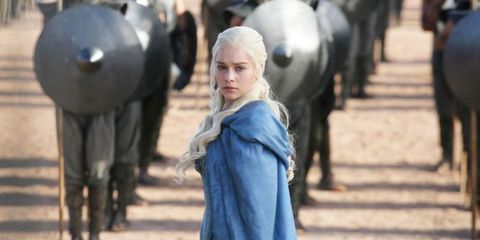 It's common sense, really: If you're making a play for the Iron Throne and sacking cities and all that, you're not going to listen to Natasha Bedingfield to psych yourself up, are you?

In an interview with GQ (viaDigital Spy), Emilia Clarke said she puts on "a lot of gangster rap" (but also Florence and Beyoncé) to get herself in the right mood for leading an army of the Unsullied into battle.

"For me, it's like, you wake up and think, 'I'm not feeling particularly badass this morning. Coolio, Biggie, can you help me?'" she said. "When you're doing a huge scene, trying to empower hundreds of extras, you've got to get me to a G."

Also effective: 1) Peggy from Mad Men's ascent set to Drake with "Rastafarian Targaryen" as the cool-down.